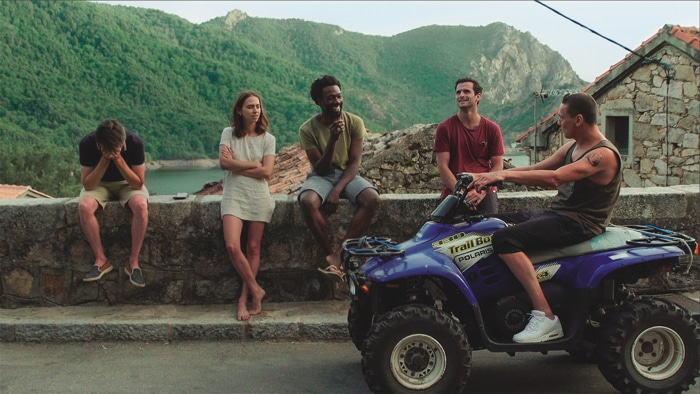 Warm, light-hearted and drôle : this free-wheeling cinema verite take on Corsican village life dances away from a formal narrative capturing the gentle offbeat nature of the Mediterranean island in summer. The first feature film from Corsican ‘theatre-maker’, actor and author Pascal Tagnati plays out in a series of quirky inconsequential vignettes – some of them quite risqué – that picture the locals at play, swimming, flirting, arguing (and even crying) as they enjoy the sumptuous scenery of this hilly island paradise at a time where villagers get together to enjoy the last days of the summer holidays.

Beautifully composed and refreshing, Tagnati’s observational approach cleverly combines drama and fiction, relying on a natural soundscape of birdsong and breeze, occasionally traditional folksongs are heard in the distance, sung in Corsican dialect (which sounds a bit like Italian, unsurprisingly), culminating in the heartrending ‘La mort de Filicone’.

I Comete is very much a collaborative effort between Tagnati and the local villagers in a cast of predominately non-pros – apart from the major roles – ad-libbing most of the way, it certainly offers an essence of the island and its people for those who’ve never been there, it works as an accidental travelogue stimulating an interest to discover more about the place. Franje, appears to be the only black resident of the village, and the kids make an older character the butt of their jokes although he seems a kind and resourceful type, and we feel quite sorry for him in his undeserved role as the ‘village idiot’. In other more downbeat moments Theo reflects on the possibility of the less happier times in his life, and Lucienne talks of freedom.

At the end of the day, the Corsicans are just like everybody else in Europe where daily life centres on friends, football, infidelity and fertility, family traditions probably loom slightly larger here than in Northern Europe but the pace is certainly slower, Tagnati lulling us into a pleasant reverie about his home, that brims with a sense of national pride and a collective joie de vivre. MT