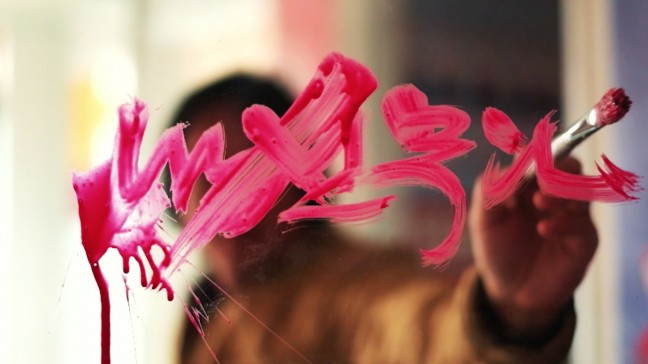 A documentary that offers food for thought for cineastes keen on Eastern politics or artistic expression.

Sun Mu lives is from North Korea where it’s impossible to send a letter to the South. His work as a contemporary artist is not recognised in his birthplace so he has defected to the South where he hopes his spirited and cheerful style of political pop art will help to build bridges and unite his divided country.

Although he exhibits Internationally Sun Mu (which means no boundaries) never reveals his face or true name in Adam Sjoberg’s upbeat and vital documentary than serves as an appealing picture postcard to the region as much as an exposé on the artist’s life, his family and collaborators.

Sun Mu honed his craft for the Kim regime but now his social realist oeuvre is cleverly skewed to lampoon the dictatorship for all the world to see, without being remotely offensive. Sjoberg’s documentary joins the artist in the run up to an important solo retrospective in the Yuan Art Museum Beijing. The project isn’t without its risks and dangers that soon emerge as the film unspools. Sun Mu is the first North Korean artist to show in China without supervision from Pyongyang. Museum curator Liang Kegang – an artist who famously auctioned a jar of French air as a comment on China’s notorious pollution levels – takes this on board with the observation: “maybe being an artist is the only way to feel a little freedom in China”.

A vein of unsettling menace threads through this ostensibly vibrant story enlivened by Sjorberg’s strikingly appealing images. The director also finds himself in the thick of the action, making the story as colourful politically as it is visually, but always upbeat and positive There are also some delicately rendered animations to enjoy courtesy of Ryan Wehner and an atmospheric occasional score from Joel P West who composed the music for Short Term 12 and Grandma. MT