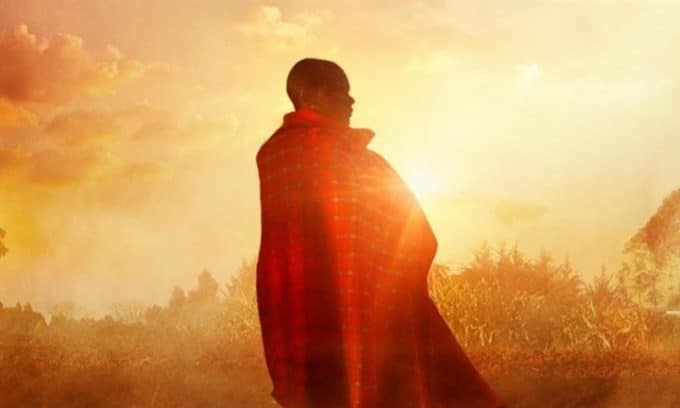 Being gay is not easy in Kenya as we discover in this matter of fact feature debut from TV filmmaker Pete Murimi that looks at gaydom in a male-dominated homophobic society, but fails to address the deep misogyny still at its core.

Paradoxically, it is not illegal in to be gay in Africa but homosexual acts are nevertheless classed as criminal offences, and violence is often meted out to those who cross the line. Samuel introduces us to “the love of his life” Alex in opening sequence where they frolic in a Nairobi waterfall having met the previous year. There are lively discussions amongst his gay friends who share their experiences of life in modern Kenya. In common with many people in the UK, Samuel runs two jobs to keep afloat in Nairobi where he works on a building site and as a netball coach. The two are now enjoying an easygoing relationship together but keeping a low profile is hard.

The film then moves to Western Kenya and the close-knit rural community where Samuel grew up. Samuel describes how it was impossible to have any kind of private life away from the gaze of his family and the close traditional Christian setup where we witness a ceremony of baptism in the local river. He was always being ‘nagged’ to find a girlfriend but describes feeling ‘different’ from the age of 14.

It then emerges that Samuel did give into his family, and fathered a child ‘to help with the farm’ before leaving for Nairobi and meeting Alex. Tellingly we never meet his wife or hear what she has to say on the matter, but his young daughter appears on camera and Samuel assures us their relationship is a good one, but worries about her finding out the truth. Samuel’s ageing farmer parents Redon and Rebecca seem a calm and genuine couple who agree to allow the cameras in their private lives.

Back again in Nairobi Samuel has discovered that his parents know the truth about his life with Alex. He shares a fear that his father may take action “to teach him a lesson” although his mother has been more accommodating. He looks forward to gathering with friends for his 26th birthday even undergoing a ‘marriage ceremony’ with Alex.

Meanwhile his father is painstakingly building Samuel a home of his own. To an upbeat soundtrack, Samuel describes the quiet shock of his father as ‘a silence’ between them grows. In Nairobi Samuel admits that his father wanted to disown him. Clearly the old man is dismayed but his views are never shared, neither are those of his mother or wife who are kept in the background, presumably forced to accept Alex as a fait accompli.

This is particularly alarming when the breezy narrative urges us to be non-judgemental, only introducing us to Samuel’s daughter halfway through the film, and ignoring his wife. Not only does this reveal the continuing misogyny of Kenyan society in order to maintain the status quo, it also sees the filmmaker acquiescing with this point of view. The focus is always on Samuel’s POV in a fractured narrative that is structured to blur the lines creating a one-sided perspective.

Always lively and colourful in its cinema verité style I Am Samuel shows how gay men get on with their lives in modern Kenya, despite the dangers, while women continue to be duped and take the line of least resistance just to ensure their men are satisfied. And although we are sympathetic to the male cause, Murimi never really addresses this issue of Samuel’s wife and the remainder of his close family. The film plays out with cheery music and a message addressed to ‘queer Africans’ “May you all live in truth”. MT