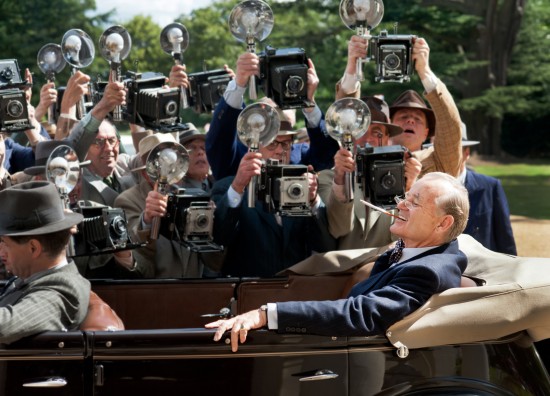 Roger Michell is a South African director who brought us Notting Hill, Enduring Love and Venus.  Hyde Park on Hudson is a glossy and elegant outing with nostalgic echoes of The King’s Speech ‘American Presidential-style’ that centres on Franklin D Roosevelt’s “special relationship” with his distant cousin Margaret “Daisy” Stuckley based on correspondence discovered after her death.

The romantic story is underpinned by a much more interesting relationship that develops one weekend in 1939 when George VI, a very insecure ‘Bertie’  played sensitively here by Sam West, pays a Royal visit to Bill Murray’s FDR in his upstate New York residence.  He’s hoping to secure America’s backing for the impending Second World War.

The role of Franklin D Roosevelt showcases Bill Murray’s gutsy talents as an impishly ingenuous seductor and shrewd politician and West’s performance is a perfect foil for Murray’s charismatic President. Laura Linney as the sweetly naive Margaret narrates the story, which swings back and forth between the romance and the political shananigans, the latter proving far more fun and engaging. It also has Olivia Colman as a frosty Queen Elizabeth playing to Olivia Williams’s rather more outré Eleanor Roosevelt. And although the Royal pair rubs along well here, they are pale in comparison with Colin Firth and Helena Bonham Carter.

Lush and beautifully crafted, Hyde Park on Hudson is a deliciously lightweight historical concoction that will appeal to audiences looking for an entertaining costume drama without serious pretensions of the lengthy Lincoln and Les Mis. Great for an easy night out with transatlantic overtones.MT