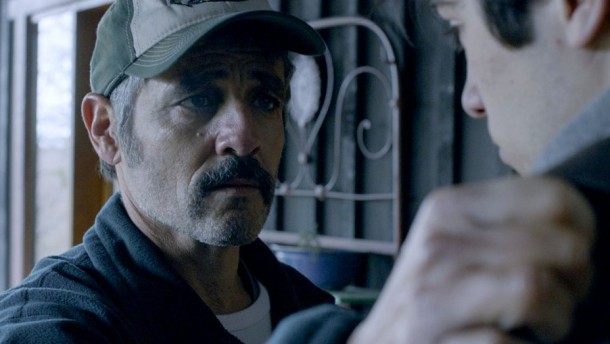 Natalia Garagiol’s feature debut is an evocative and nuanced take of alienation that makes good use of its stunning locations in windswept Patagonia to tell a well-drawn and convincingly performed story of family discord in Argentina.

In the opening scenes teenager Nahuel (Lautaro Bettoni) is expelled from his Buenos Aires boarding School after a tiff on the games field and is shipped off by his affable stepfather Bautista (Boy Olmi) to spend some time with his distant father Ernesto in a wintery Patagonia. Here father and son keep continue to keep their distance in the new family set-up consisting of wife Clara (Rita Pauls) and three young step-sisters.

Game ranger Ernesto takes Nahuel hunting with him and teaches him how to use a gun in the hope of bonding after their difficulties and gradually the two become less frosty towards one another to despite a distinct verbal froideur in this story telegraphed by its often menacing atmosphere – mostly over the dinner table – in body language rather than meaningful dialogue. In flashbacks it emerges that the rift between the men seems to have developed after the loss of Nahuel’s mother but all this plays out in the final scenes via a video on his mobile and a roadside contretemps with his dad.

Fernando Lockett’s blue-tinged images often picture Nahuel as a distant and disengaged character who is ruminative, morose and miserable in common with the icy landscapes surrounding him. The only solace appears to be from Bautista, although it’s unclear why Nahuel can’t stay with him, rather with his hostile father, who seems to hold some grudge against him as the pair eventually thrash it out with some success. With appeal for young audiences as well as the arthouse crowd, TEMPORADA DE CAZA is a sure-footed first feature for Garagiola and a deserving winner of the SIC Award at this year’s Mostra. MT