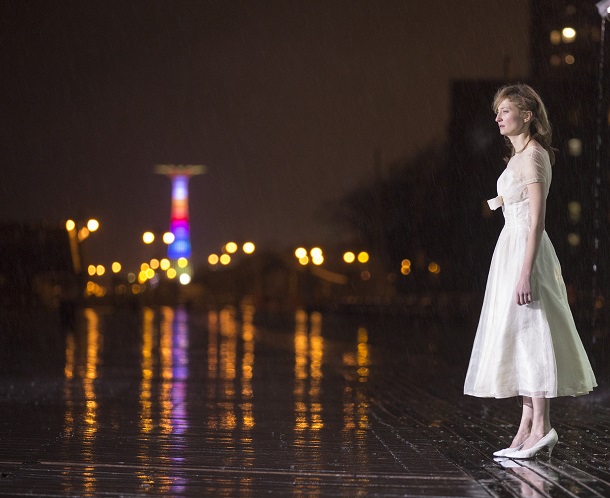 In Severio Costanzo’s second Venice offering, Jude (Adam Driver) and Mina (Alba Rohrwacher) have an inauspicious meeting in a Chinese restaurant in New York, where they are locked in the bathroom together. It takes a while to free the couple, who then lose no time in slipping between the sheets. Mina is working for the Italian embassy and, when she is transferred, Jude asks her to stay. Soon they are expecting a baby. Mina consults a psychic who predicts this will be an ‘indigo’ with paranormal powers.

The audience, like Jude, shrugs off Mina’s conviction – but it is the first of many indications that Mina is a few sandwiches short of a picnic. After lengthy weddings celebrations champagne glasses are packed away as they couple hunker down in this weird and quirky drama that’s not quite a thriller but feels it ought to be. A feeling of claustrophobia descends on their cramped flat that seems to made of little boxes where nobody is able to breathe – but it is clearly a place were Mina really thrives. After the birth of the baby boy, the couple remain cloistered in the apartment.

Mina, who has been anorexic during the pregnancy, loses even more weight, and the baby, fed only on vegan food like her mother, is neither gaining weight or growing. Finally Jude wakes up to this fact, and takes his son to a doctor, who advises a radical change of food for the baby. Whilst Jude is only too willing to follow the advice, Mina fights him all the way. She is also germo-phobic and does not want to leave, or take the baby outside. Finally Jude, with the help of a social worker, more or less kidnaps his son, who goes to live with his mother (Maxwell) in the countryside outside New York. But Mina does not give up, she tries to regain custody of her son, and after Jude hits her, she manages to regain custody. The desperate grandmother can only think of a very radical solution.

Half way through the film, the fish-eye lense is introduced, turning the narrative even more into a real life horror story. Mina is a frail and emaciated creature, just skin and bones, a fanatical gleam in her eyes. Jude is geeky and ambivalent – for much of the film, he tries to mediate between Mina and reality. His mother is made of much sterner stuff, and does not fall for Mina’s passive-agression schemes. However harsh the denouement appears, it’s clear that somebody had to make a stand – and Jude was much too feeble to be this person. Despite a weak script with gaping potholes, the superb cast handle the action masterfully. Not a film for the faint-hearted, but a convincing story of ordinary madness. MT