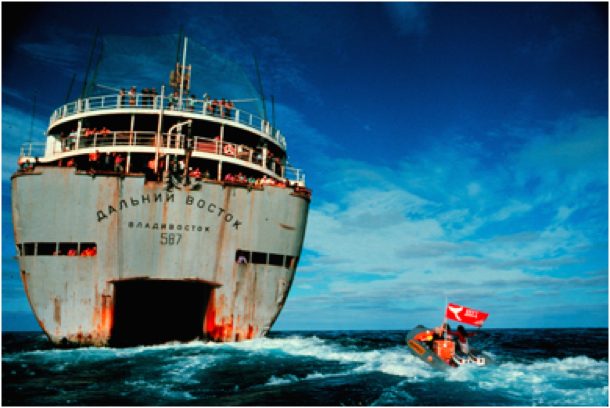 In 1971, the Canadian city of Vancouver was something of a centre for counterculture: draft dodgers from the USA, hippies, anarchists and environmentalist had found a home which would be the birthplace of “Greenpeace”.

Town of Runners director and writer, Jerry Rothwell’s documentation of the early days of what is now a worldwide mass-movement, is both informative and unsentimental. The birth of the movement seemed, ironically, not a great success: in the Autumn of 1971, President Nixon had authorised the underground explosion of a five ton nuclear bomb for test reasons at Amchitka, an island of the Alaskan coast. The “Don’t make a Wave” committee, the forerunner of Greenpeace, among them their future leader Bob Hunter (1941-2005), hired the ‘Phyllis Cormack’ and sailed towards the test site, trying to stop the test. Turned back by an US naval vessel, the crew returned deflated to Vancouver – but to their great surprise, also to a great crowd celebrating their attempt.

The US government was surprised by the worldwide protests and no further tests were ever scheduled. The next expedition of the Greenpeace warriors led them to confront the Russian Whaling fleet in 1975. Like the 1971 intervention, this was again filmed on 16mm, and the bloody operation of the industrial slaughter of whales still takes the breath away and is impossible to watch in its entirety. Putting themselves between the whaling vessel and the animals, the activists were in grave danger; one of the deadly spears fired at the whales, only just missed the head of one the protesters. Soon, the first controversy occurred when the US government gave Greenpeace the positions of the Russian whaling fleet (but not the one’s of Japanese fleet), so as to embarrass the cold-war enemy. Splits in the leadership of Greenpeace occurred, mainly because one of the founder members, Paul Watson, had a more direct and confrontational approach. After he was dismissed from the organisation, by a vote of eleven to one, he founded “The Sea Shepherd Conservation Society” in 1977. Again, the 16mm footage of the barbaric slaughter of baby seals by Canadian hunters in the Gulf of St. Lawrence – with their mothers trailing their bodies – is too much to watch. Whilst Hunter and the remaining steering board members of Greenpeace, called Watson an eco-terrorist, anybody witnessing the slaughter of the seals cannot be so unmoved as to really condemn more direct action against the perpetrators as “terrorism”. Watson’s organisation became soon very powerful, thanks to the support of Brigitte Bardot, after whom a vessel of “Sea Shepherd” is named.

Hunter left Greenpeace later to return to journalism, entering politics (running unsuccessfully for provincial parliament in 2001), before his death of cancer in 2005). His contribution to the movement is undoubtedly important, his leadership mainly free of any ego, he was the original poster guy in the early days, always constructive and trying to balance out the splits in the leadership. Whilst Paul Watson still commands our respect, this cannot be said about another early leading activists, Patrick Moore, who today runs a corporate consulting firm, arguing that “climate change is positive, since a warmer climate benefits all” and denies any men-made contribution to environmental problems.

James Scott brilliantly weaves the past and present in this skilfully layered storytelling that shows the founders of Greenpeace not as icons, but as very ordinary human beings whose success was not a result of their great strategies, but of  their conviction that was powerful enough to put themselves in danger for the good of their cause. They and their enthusiasm did change the world, after all. AS