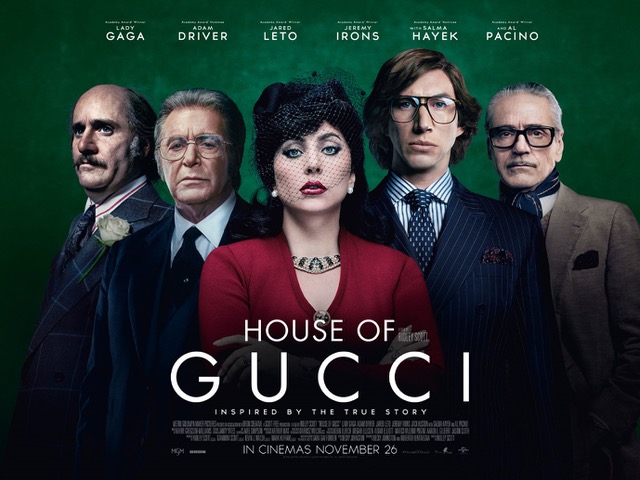 Ridley Scott’s tragicomedy about the downfall of the Gucci family is a real epic: flawed, flamboyant but highly entertaining. A perfect clash between style and bravado. Adam Driver is the driving force behind it all. And he’s brilliant as the starchy patrician lawyer Maurizio Gucci seduced and ultimately murdered by Lady Gaga’s buxom firecracker, Patrizia Reggiani, the daughter of a haulage contractor, whose elbows are as sharp as her husband to be’s tailoring.

Maurizio is the son of suave Gucci scion Rodolfo played by Jeremy Irons whose well-tuned antenna has already spotted Gaga as a gold-digger. And predictably it all ends in tears when Rodolfo dies leaving Maurizio as the majority shareholder whose ideas for the family business conflict with those of his cousin Paolo Gucci – Al Pacino knows all the ropes here as the New York cousin who kept the brand exclusive offering his celebrity clientele loafers lined with gold leaf.

So the social side and the business story go hand in hand in a patchy drama that careers all over the place tone-wise – the bits with Jared Leto as Paolo’s idiotic son are awkwardly painful – but it speeds along like a Ferrari when Driver and Gaga are in the frame, their chemistry and glitzy lifestyle providing most of the fun, Pacino giving one of his best performances in recent years as the savvy businessman who finally loses out when Maurizio, and ultimately the Arab investors gain control. And Rodolfo’s predictions come true, and Maurizio eventually tires of his little wife’s unbridled ambition, and he moves onto the elegant charms of Paola, a woman from his own background in the shape of Camille Cottin (there’s a lovely scene where she shimmies, fireside).

House of Gucci is largely about a clash of cultures, and House of Gucci (based on a book by Sara Gay Forden) is spot on in its retelling of how the once chic emblem of the 1970s – anything by Gucci back then was considered highly desirable – is soon tarnished by family disagreements and over-exposure, so eroding the core values it represented as a brand. But never mind all that, House of Gucci is flamboyant fun. MT