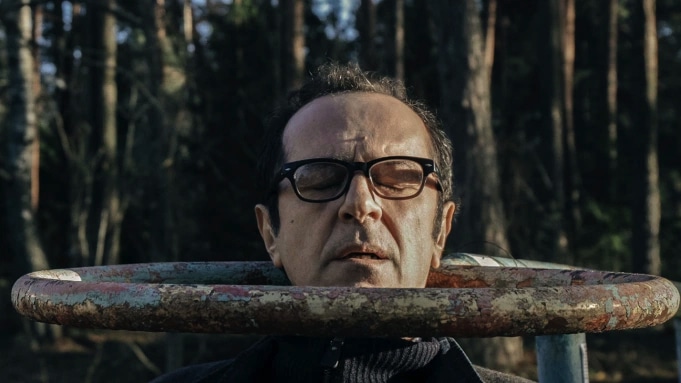 A middle-aged academic accused of embezzlement is the focus of this discursive arthouse feature from Russian director Aleksey German Jr. David (Ninidze) may be confined to house arrest by the authorities but his mind is free to expose a rich minefield of social issues affecting modern Russia.

There’s nothing particularly to this story that treads old ground for the most part. David’s critique touches on corruption, state-sponsored violence and anyone who dares to speak out against the system. But  filtered through David’s own troubled state of mind, his bruised ego and indignation at being cooped up by the system that drew sharp criticism after his sketch of the Mayor having sex with an Ostrich, the story becomes more interesting. As such this is a rich character drama as much as a social satire. House Arrest is the most accessible film German Jr has made so far following in the footsteps of his recent features Dovlatov (2018) and Under Electric Clouds (2015), and premiering in this year’s Cannes Un Certain Regard sidebar.

People seem more concerned with the sex act itself rather than what it represented, and herein lies the dark irony of the situation further enriching the film’s plotlines. As an eminent professor specialising in Russian literature and particularly a late 19th century period referred to as the ‘Silver Age’ – fellow writer German clearly feels the professor’s anger acutely, and provides David’s mother (Roza Khairullina) as a wise stooge allowing him to expound on his ideas. Ex-wife (Anastasia Melnikova) is reluctant to become involved as her husband is part of the system but she supports him with food parcels in his increasingly untidy prison. The only person entirely onside is his lawyer Anna (Anna Mikhalkova) and she has her work cut out when strange men arrive at the flat in the middle of the night to beat him up. This is a timely if claustrophobic drama that will resonate with everyone who has been trapped in their lives and forced to ruminate and navel gaze in these Covid times. MT