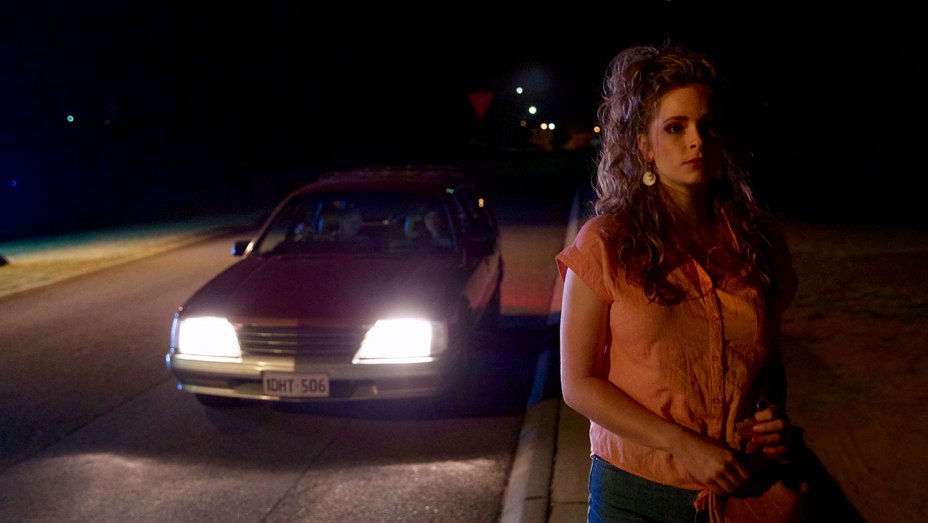 Writer/director Ben Young’s debut feature, about a real life couple who murder young women, may be gruesome but it is never speculative or voyeuristic in focusing on the psychological interaction of the murderous pair, and how their clever final victim manages to evade them.

The thriller unfolds in Perth, South Australia in 1987 where David and Catherine Birnie raped and murdered four women. Birnie came from a violently dysfunctional background and first met Catherine during their school days.

The film opens to the drone of Dan Luscombe’s electronic score with Michael McDermott’s stealthy camera trailing the suburban avenues of Perth where scantily clad schoolgirls play netball. In this neighbourhood teenager Vicki Maloney (Cummings) suffers more than her fair share of existential angst, living with her recently separated parents Maggie (Porter) and Trevor (De Montemas). Trevor is a well-off surgeon still trying to coerce his disenchanted wife back into the marriage. Vicki rebels against her mother’s regime of discipline and curfew times, and one night escapes to a party. On a lonely street she is picked up by Evelyn White (Booth), and her husband John (Curry) in a car. We have seen the couple earlier as well as posters with photos of missing girls, displayed at the police station. The Whites take Vicki to their squalid bungalow where she is chained to a bed. This is all done in a nonchalant fashion leading us to believe that it’s all happened before. But we also get the feeling that Evelyn is – perhaps for the first time – jealous of the prey.

It soon becomes clear that John has a special hold over Evelyn: she has lost her two children from another marriage, and John drives this point home again and again. White is essentially weak, killing a dog in a rage of fury, and abusing his ‘wife’ physically – for even the smallest transgression. Evelyn is in sexual thrall to John, torturing and raping Vicki, all of it off-screen, in the hope that he will stay with her, because “she is special”. Evelyn cares little for the victim and is complicit in murders simply because she fears being alone – she does not enjoy the violence, but sees it as the only way of “keeping her man”.

This is a raw and sleazy story with convincing performances, particularly from Evelyn in her ambivalent role as John’s helpmate. Curry is a pathetic character, a glib psychotic prone to episodes of disproportionate brutality: he kills the couple’s dog for fouling the kitchen and uses psychological torture and rape to spike his sexual appetite. Young directs with mature assurance, never losing control of the narrative but keeping his distance. In spite of the gruesome topic, he is more interested in asking questions than staging a sensational case – and succeeds in the unspeakable. MT

HOUNDS OF LOVE ON ARROW-player.com