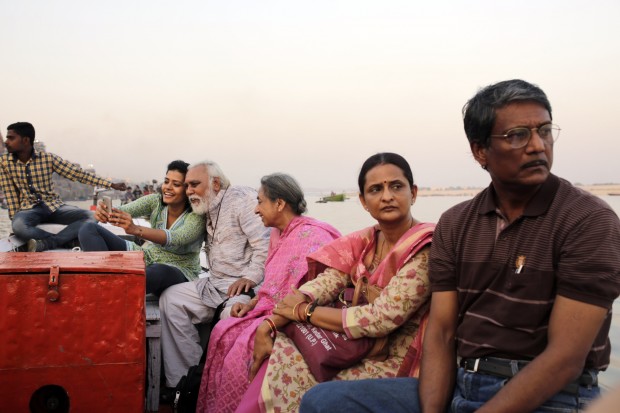 In this appealing arthouse drama a 77 year-old grandfather Daya (Lalit Behl) dreams that his life is coming to an end and travels to the sacred site of Varanasi in order to prepare for his final days and achieve salvation according to his Hindu faith. His put-upon son Rajiv (Adil Hussain/Life of Pi) decides to accompany his needy father – more out of duty than desire – but the two gradually bond by the banks of the Ganges while the rest of us experience the inner workings of traditional Hindu life and the spirituality of this hallowed riverside location.

HOTEL SALVATION is the confident feature debut of Indian director Shubhashish Bhutiani who is best known in film circles for his Venice-awarded short Kush (2013). Working with a low budget and including gentle humour to avoid over-sentimentality the director highlights family tension throughout first between Daya and Rajiv and then between Rajiv and his own daughter Sunita (Palomi Ghosh) who is engaged to be married and keen to make her own way in life. Meanwhile, the stressed-out Rajiv is trying to run a business with his efforts being constantly undermined by the niggling demands of his father, who meanwhile is steadily befriending a wise woman of his own generation Vimla (Navnindra Behl). There is no controversy here as the intergenerational conflicts are gently smoothed over despite one frantic scene where the tempo is raised over Sunita’s love life, forcing Rajiv to get back home.

The HOTEL SALVATION in question refers to a rather ramshackle retreat in the heart of Varanasi where the elderly repair to review their lives and come to terms with their own mortality. It is a place of transformative tranquility where a sadhu presides over the daily prayer rituals which are never taken too seriously, as in a scene where the Daya on his last legs commands that the mourning musicians “sing in tune please”. Certainly an experience to relish HOTEL SALVATION is a treasure not to be missed. MT

OUT ON GENERAL RELEASE AT ARTHOUSE CINEMAS FROM 28 AUGUST 2017