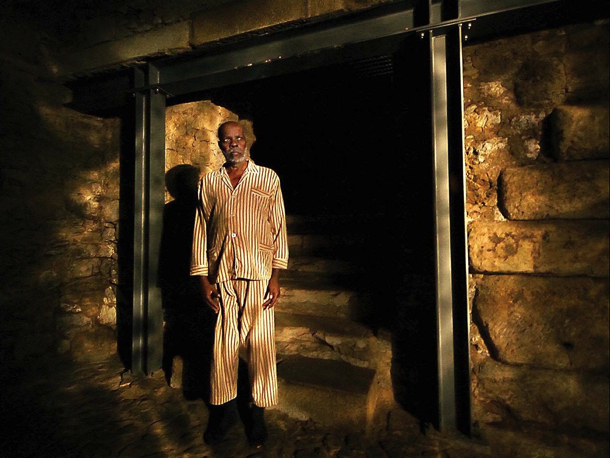 Though German Expressionism might be an unlikely source of inspiration for Costa, there’s more than a touch of Robert Weine’s THE CABINET OF DR. CALIGARI (1919) about his latest feature, which before anything else seems to entrap its listless characters in harsh quadrants of chiaroscuro lighting, with ominously shadowy depths encroaching from the extreme edges of frame. Cinematographer Leonardo Simões employs wide-angled lenses and canting horizons to distort the film’s claustrophobic interiors into a nightmarish grid of dilapidating geometry. It’s as if the very axes of the earth shifted a long time ago—and people are only now adjusting.

Also like CALIGARI, HORSE MONEY is set for large portions of its narrative in a medical centre, unfolding as a succession of dreamily purgatorial fragments that suggest a kind of hallucinatory hotchpotch of somnambulant trauma. Ventura is one of only a few patients left at this half-abandoned outpost, being treated for a nervous disease after being badly beaten by soldiers sent in to displace him and others from the Cape Verde settlement of Fontainhas decades previously (forgoing traditional drama, Costa presumably assumes his audience is familiar with the real-life history so obliquely referenced here). Claiming he’s 19 years and 3 months old, Ventura may or may not be a reliable narrator: one consequence of state violence is, apparently, the aggressive onset of senility—which of course benefits a state eager to bury its colonial guilt.

Our visibly shaken hero is visited by ghosts from rosier pasts. This circle of displaced pals posthumously places its trust in Ventura to unshackle memories and preserve the truth. Chief among such friends is Vitalina, a benumbed widow who speaks only in a monotonously stately whisper—as if wary of disturbing sleeping dogs from their slumber. In a concluding sequence, Ventura is confronted by long-suppressed horrors in an elevator—a space he shares with a street performer-like ‘human statue’ dressed as a soldier from the Revolutionary Army. Large parts of this scene arrive intact from ‘Sweet Exorcism’, Costa’s largely insufferable contribution to the typically uneven portmanteau project CENTRO HISTORICO (2012). At least on this occasion we’re given a little more context.

Like the elevator itself, the film as a whole seems reluctant to move forward: though Ventura is eventually discharged from the facility, his mental wounds don’t appear to be healed. In fact, stasis is one of the film’s visual strengths: it opens stunningly, with a series of Jacob Riis photographs. Hereafter, Costa repeatedly shows himself as a potential master of still photography, having his performers pose motionless within absorbingly framed scenarios. Moments such as that in which Ventura walks along a road in his red underpants only to be stopped at a crossroads by armed soldiers and a tank, for example, have such a potency and urgency about them that one can’t help but wonder if the director’s thematic aims would be better served by a stills exhibition.

Until then, we’ll endure these glacial temporalities the Lisboan dares to impose upon us. In passing, we’ll merely note that challenging, politicised cinema doesn’t need to be a challenge to sit through. But at least this pertains to somebody’s idea of a worthwhile artistic experience—which, for any artist wanting to do things her or his own way, is sometimes enough. MICHAEL PATTISON