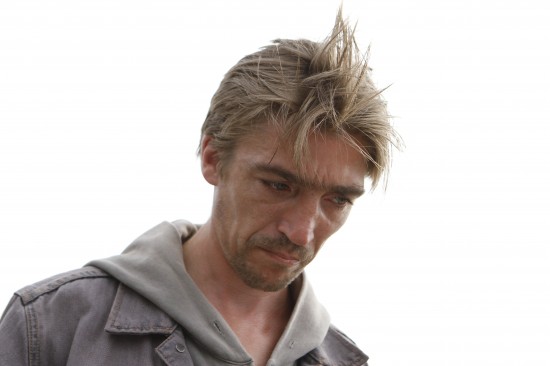 In the picturesque rolling seascape of Pas de Calais, a stranger called Guy (David Dewaele) wanders mysteriously around praying and staring out to sea: is he a saint or a serial killer? Well what do you expect from Bruno Dumont, the French filmmaker and philosopher who brought us Hadewijch, Humanite and La Vie de Jesus and who shrouds his films in an air of mystery that either appeals or irritates but always haunts the filmgoer.

Certainly there are some violent incidents puncturing the overall tone of bucolic serenity here and and some subtly nuanced turns from the nameless guy and a punkish girl (Alexandra Lematre) who follows him around and gives him food parcels.  They walk purposefully down pathways and look into each others’ eyes: is this the second coming? Patiently we wait for the miracle to happen.

Bruno Dumant wants us to use his work as a canvas on which to project our own spirituality and thoughts but after watching this well made arthouse poser, you come away with more questions than answers. MT