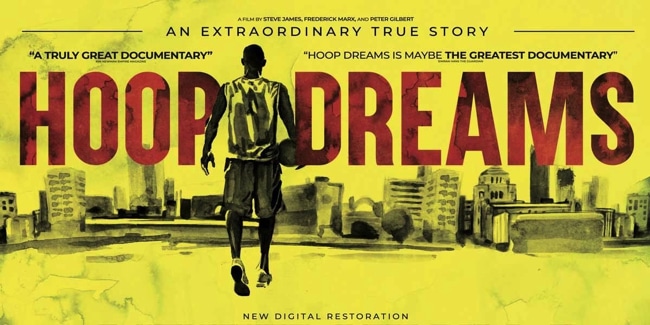 A sporting dream based on basketball spawned this multi-award winning documentary about two becoming NBA stars.

Arthur Agee and William Gates were fourteen year old Afro-Americans living in different housing projects in the West Garfield neighbourhood in Chicago. Their flair for the basketball that saw them beating their elders and competitors captured the attention of a scout who ‘encouraged’ them to enrol at St. Joseph’s, a middle-class (and therefore nearly completely white school) in a leafy suburb.

The star pupil there was Isiah Thomas an NBA legend. It took the two boys three hours a day for the roundtrip (something quite normal in the US unlike here). But it turned out Arthur was not as promising as they had hoped, so the school literally throw him out in the middle of the academic year, his now estranged parents being unable to pay their part of the school fees, so Arthur had to join his local community school.

William, on the other hand, found a wealthy sponsor in Mrs. Wier, who helped with his family’s finances. No such luck for Arthur, whose parents Arthur sen. (‘Bo’) and Sheila had split up, his father spending seven months in prison, selling drugs on the open-air playground where Arthur often played with his friends. When Sheila lost her job as nursing assistant, electricity and gas in the home was turned off. So the filmmakers decided to help out.

Gene Pingatore, the team’s basketball coach at St. Joseph’s, turned out to be a bully and particularly so towards William who suffered two serious knee injuries, nearly ending his career. Curtis Gates, Williams’ older brother, had been an outstanding player himself, but was called “un-coachable”. He would be shot dead just after the turn of the century. Bo, Arthur’s father, also was murdered in 2004.

Not surprisingly, Sheila was thankful that Arthur was still alive and able to celebrate his 18th birthday. For William, St. Joseph more than supportive: they ‘massaged’ his academic grades so he could attend Marquette University. Arthur too reached university level at Arkansas State, after a detour via the Mineral Area College. Neither men would play in the NBA, though William came nearest in 2001. After training with Michael Jordan, he missed his trial with Washington Wizards because of a foot injury. He is now a Pastor and Youth Team coach in Texas, Arthur does community work in Chicago, funding himself with the USD 200,000 bursary the producers gave each of their subjects after the surprise success of the documentary.

Watching Hoop Dreams, you can understand the Americans’ fixation for ball games of all sorts. Spectators become hysterical in their thousands, and on a scale that far surpasses anything we’ve come to appreciate in Britain. Hoop Dreams could be called the first reality doc: not a second has been wasted on Hollywood structures – a reason, the feature was boycotted by the Oscar jury for Documentaries. The three filmmakers capture the essence of the American Dream: sport and music as an escape from the poverty trap. Sadly, drugs and poverty are now the only release for the huge majority who fail to reach the promised land. AS