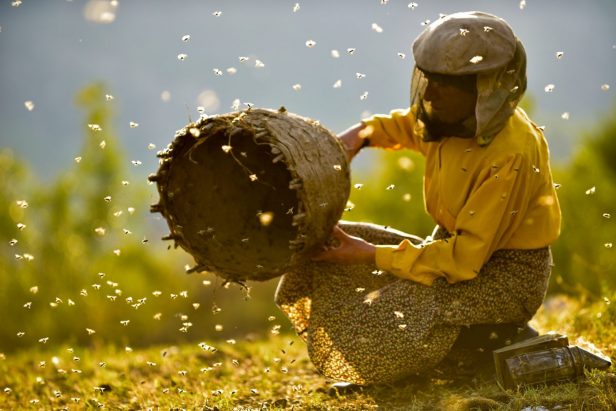 Bees are one of the most vital elements in our delicate ecosystem. But rather than tell another preachy tale about disappearing ways of life, these two Macedonian filmmakers have spent three years making their revealing debut documentary exploring the art of wild beekeeping and a Turkish woman who is keeping the tradition alive against all odds in a remote corner of the Balkans.

In her mid fifties and caring for an half-blind bed-ridden mother, Hatidze is a cheerful and enterprising soul. She struggles on alone in this inhospitable terrain sharing her life with a menage of dogs and cats, and the vituperative insects who provide her with a living, her father having put paid to any chance of a husband or children. It’s a story that will ring true with those still working hard and looking after ageing parents as they approach the lonely coalface of their own mortality.

“Half for you, half for me” she says generously, sharing the honeycomb with the bees to assure their continued survival. and often climbing to hazardous rock-faces to locate and nurture the crucial queen bee that brings the swarm with her. After nurturing the swarm and culling the precious nectar, Hatidze then makes a perilous journey on foot to Skopje  where she barters with local market holders to sell the honey for as little as 10 euros a kilo.

Honeyland is a remarkable  vérité study of loneliness and endangered tradition. As Hatidze soldiers on in harmony with nature but without power or mod cons, a jet plane soaring into the blue is the only reminder of the 21st century.  Bee-keeping is not just a quaint outdated pastime but vital to our survival and the pollination of plant life that feeds the world.  Hatidze is said to be the only woman in Europe still carrying on the practice in the traditional way.

Neighbours are often an intrusive nuisance – and particularly here when a large group of rowdy herders arrive to graze on the land with their cattle and noisy kids. Hatidze does her best to get on with them but their own swarm of bees poisons the ones she has carefully cultivated; the chief herder is only interested in instant results and it clear to see the filmmakers’ analogy with mass globalisation,

Fejmi Daut and Samir Ljuma capture this extraordinary place with its rocky terrain, sweltering summers and snow-swept winters when the wolves howl all night. Hatidze is at one with nature a harsh but rewarding life which she accepts with grace and fortitude    as she walks out alone into the wilderness – both metaphorically and physically – determined to continue alone and at peace with her dog and her bees. MT

NOW ON RELEASE FROM FRIDAY 13 SEPTEMBER 2019