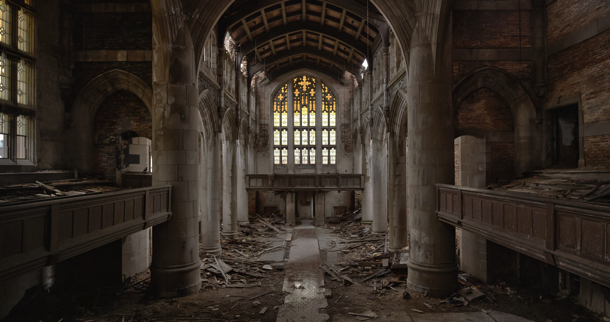 Nikolaus Geyrhalter’s sci-fi documentary HOMO SAPIENS imagines a world slowly won back from the human race by nature. Tackling topical themes of human fragility it silently explores what it means to be human in an age where humanity has wreaked so much damage on the earth and yet is precariously poised to self destruct. By way of stark visuals depicting abandoned churches, ravaged wastelands and buildings overgrown by nature’s inexorable grip. In this chilling exploration of man’s decline, Geyrhalter poses the inevitable question – What will remain of our lives after we’re gone.

Empty spaces, ruins, cities increasingly overgrown with vegetation, crumbling asphalt: the areas we currently inhabit in the name of ‘civilisation’ gradually disappear. Now abandoned and in varying stages of decay, these urban spaces are reclaimed by nature after emerging from it so long ago.

HOMO SAPIENS is Sci-fact; contempo and post-apocalytic but no human being actually appears in this paean to people. Geyrhalter uses fixed shots to convey this desolate landscapes, buildings, schools and government installations in far flung reaches of South America, Japan and deserted corners of Europe. He never attempts to explain or offer reasons for for their disuse or give any hope that they will be rebuilt or refurbished. This is the end of the line and the tone is morose and unsettling but also positive future for the animal kingdom. The documentary is silent save for Peter Kutin’s soundscape of windtorn and echoing remnants of civilisation where Nature finally holds sway. MT