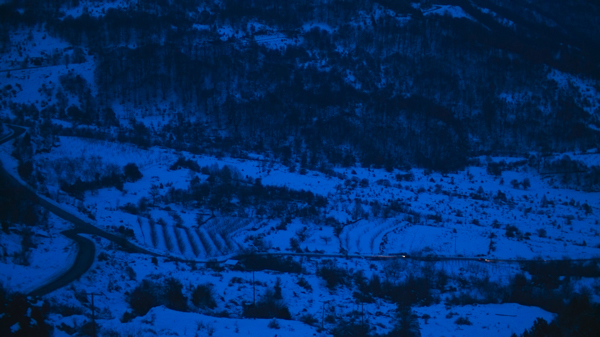 Jelena Maksimovic is inspired by her own life experience in this feature debut, a lament about loss but above all, a feminist reckoning dedicated to the filmmaker’s grandmother Elina Gacu (1928-2017), evacuated from civil wartorn Greece to what was then Yugoslavia, now North Macedonia.

The stark winter setting makes this all the more foreboding: A car approaching a wild mountainside, a young woman behind the wheel, a banal, romantic song on the car stereo. Not the best of welcomes for the ‘homecoming’ of someone who has never set foot in her country before.

The changing seasons mark a year’s stay in this village, and her growing unfulfilled longing to find a place which connects to her grandmother who has lived here since being exiled from her homeland during the Civil War (1946-1949), the first proxy war of the global Cold War.

This young woman is a visitor but not a tourist, wanting to claim something of the place for herself. Fragments of war of are everywhere: in fortifications, ruined houses and the reminiscences of old men who recall partisans coming from the mountains to fight government troops before vanishing back into their hideouts.

The woman befriends a restaurant owner, they cook together, he and his friends perform an old folk dance. But for the most part she tries to connect with the inhospitable terrain where animals are her only friends.  Hidden traces of the combat are everywhere. Finally, after so much silence she breaks into a final poetic outburst, accusing the men of bringing warfare to the place and repressing women. She claims the trees in the woods are the only true communists, and mourns the fate of her grandmother.

DoP Dusan Grubin makes an unobtrusive foray into this melancholy setting  – his harrowing panorama shots are just a foretaste of what is to come in a paean to lost identity. The main unnamed character is a victim of fragmentation and alienation: her trial to find anything like home is hampered by the silence around her. The past is the past – whatever the partisans stood for – or whatever the war was about. Her grandmother is a bridge to this past and will lead her back to herself. Homeland is for every soul searching for a place to call their own, moored somewhere in their dreams. AS