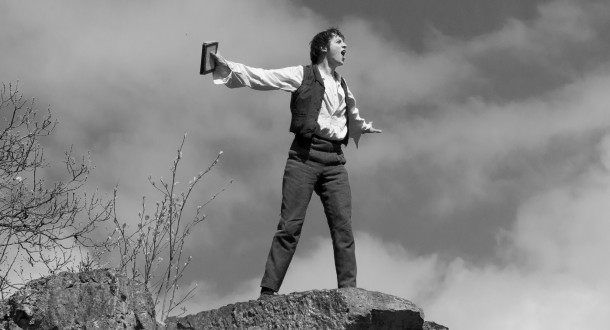 Few directors would start their eighth decade shooting a four-hour epic – mainly outside and in harsh weather. But Edgar Reitz cannot let go: HOME FROM HOME is his forth saga about the Hunsrück village of Schabbach. Whilst Heimat I(1984) covered the period between 1944 and 1987, Heimat II (1993) depicted the student uprising of 1968, and Heimat III (2004), dealt with the reunification of the country.

HOME FROM HOME is a prequel, starting in 1842, and dealing, among other upheavals, with another muffed revolution in Germany. Jacob Simon (Schneider) is a dreamer and voracious reader, the teenager is always punished by his authoritarian father Johann (Kriese) for trying to avoid working – apart from a blacksmiths, the Simon family runs a farm. After yet another confrontation, Jacob runs away from Schabbach to live with his sister Lena (Fouche), who is not allowed home since her father, a fervent Protestant, disapproves of Lena’s Catholic husband. But Jacob’s restful period is short, his brother Gustav (Scheidt), just back from his military service, talks him into returning home on account of his mother Margarethe’s (Breuer) ill health. Having met Jettchen (Bill), Jacob is madly in love with her, but brother Gustav gets between the two and marries Jettchen, causing Jacob to run riot against the authorities, ending up in a fortress prison. Jacob, who has studied the languages of the Aztecs – he knows all 22 expressions for their word for ‘green’ – dreams of an emigration to Brazil, and with the help of the engraver Olm (Luser), whom he met in prison, Jacob finally obtains all official papers for the journey. But again, Gustav ruins everything, declaring that he and Jettchen will go to Brazil, leaving Jacob behind, to look after his mother. As a small consolation, Jettchen sleeps with Jacob before she leaves with her husband. Frustrated, Jacob gives up hope any of escape from Schabbach, and marries Florinchen (Lembeck), Jettchen’s best friend.

Gernot Roll’s black and white images of devastating poverty, death and endless epidemics dominate the film. Countless funeral processions and carriages filled with emigrants and their sparse belongings pass over the bridge near the village. Occasionally, certain objects are coloured in: as in a river scene, where Jacob has joined students on a boat, fighting in a pre-March action against Prussia, waiving the red/black/gold coloured banner, before being shot at from the shore by Prussian soldiers.

But Jacob is just a poor relative of Hermann from Heimat I: whilst Herman left Schabbach and became a composer, Jacob is all German introspection, part of a much too folkloristic set-up, where emotions are kept inside, and the self-repression of the individual is seen as praiseworthy. The reconciliation between Jacob and his brother, then later with his father, when Jacob’s stationary steam engine succeeds (whilst Gustav’s had exploded before), both ring false. Reitz, who had set out to fight against the affirmations of existing norms in his earlier Heimat projects, now rather serves traditional values like “Bleibe zuhause und nähre dich redlich“ (stay at home and live in moderation). In spite of its brilliant aesthetic values, including a convincing ensemble cast and imaginative settings by the PD Toni Gerg, who died during the shooting, HOME FROM HOME lacks the distance and analytical prowess of Heimat I. But the dark and gloomy images of a poverty ridden Europe, which was itself a continent of emigrants in the 19th century, are haunting and poetic, and do more than compensate for unwelcomely generous running time and a sometimes tepid approach. AS