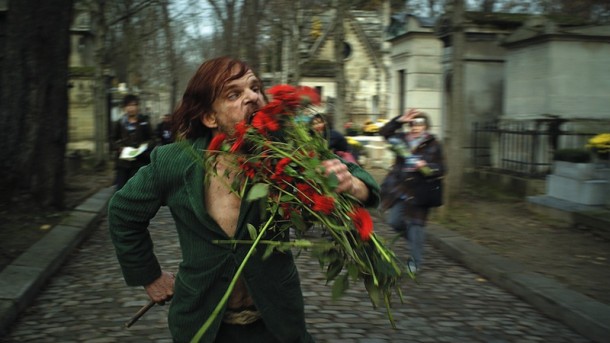 Leos Carax is always full of surprises and Holy Motors is no exception. Weird and beguiling, it’s another fantasy trip into the unknown from the Cinema de Look movement focusing on style over narrative with a dynamite Denis Lavant as the central character Mr Oscar.

From the opening titles this darkly comic kaleidoscope fires up our imagination – how can a respectable business man start the day in suit, tie and City mode and then morph into a series of different guises arriving home in the back of a limo .

As Mr Oscar, Denis has fun with wigs, make-up and special effects costumes that transform him into many weird guises: a street beggar, a performance artist and a graveyard ghoul, to name but a few. During this nocturnal reverie a frisky Eva Mendes is carried off on his shoulders and there’s an impromptu turn by Kylie Minogue who bursts into song on the Pont Neuf and then throws herself off the roof of a disused Parisian clothing store in an odyssey of bizarre and outlandish antics. Suspend your disbelief, sit back and just let the whole thing wash over you. MT.