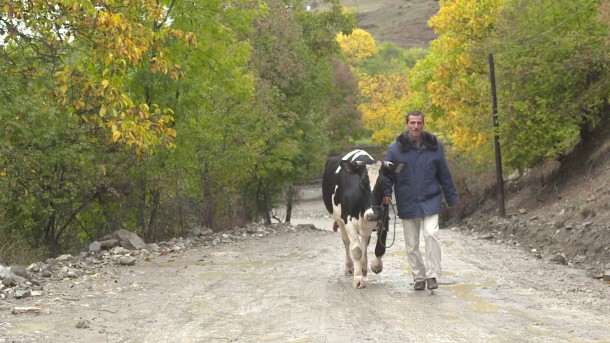 With the villagers of Luhic, Azerbaijan

Writer and filmmaker Iman Hazanov’s debut feature uncovers a picturesque corner of rural Azerbaijan where the only immigrants are of the bovine variety. Magnificently captured on the widescreen and in intimate close-up, this cinema vérité piece takes us through a year in the life of an impoverished villager who is determined to give his family a better life without leaving his homeland.

A decent family man, Tapdig figures that prosperity is cow-shaped. On the telly he’s seen that European cows are bigger and more healthy than Azerbaijani ones. They also produce more milk. Unfortunately the local village elders don’t agree: “Bring a woman, yes, but not a cow”.  Although the subject matter is light-hearted there are important messages in the idle chat of these village elders who, despite their old-fashioned thought patterns, consider themselves fully part of the European Union, but are at pains to point out “Prosperity must come from the top”. These Azerbaijani villagers claim to be contented feel looked after by their Government. Traditional they may be, but they also have minds of their own in this close community, and are not afraid to express them. But Tapdig believes prosperity is a ‘bottom-up’ affair and is determined to prove it, despite the negative opinion of his elders.

Sarvar Javadov’s camera-work is Turkish in style with its wide-screen panoramic views capturing the great sense of space  in the surrounding countryside and the moody skyscapes of the Eastern Caucasus, and this is borne out in the views of the villagers: “there’s plenty of room here for everyone”. The dialogue scenes are shot in long slow takes, often with subjects wandering out of the frame while still talking, which adds a freshness and spontaneity, and occasionally a comic element, as when one of the old men nearly slips on the ice and the path of the cameraman.

Ready to risk it all, Tapdig eventually buys his cow, names her Madona, and brings her home to his family where she flourishes in a seemingly idyllic setting, providing milk, and even a calf: Alyona, although there is no mention of the breeding process, and no evidence of any other cattle in the village, apart from geese. The community here is clearly of the Muslim faith with their mosque the biggest building in the village. Azerbaijan, like Turkey, remains a secular country but a traditional one, where women are clearly submissive to their husbands but well cared for and loved, almost on a par with their animals, or so it seems. We see this in Tapdig’s single-mindedness and the fact that he discusses business matters with his son, even though the boy is yet hardly a teenager. His wife Vafa is reluctant to take care of Madona but eventually the cow becomes part of the large community with a promise of better things to come with Tapdig managing to finish building his house thanks to the proceeds from Madona’s milk.

Imam Hazanov took part in the Berlinale Talents scheme in 2014 and his touching human interest documentary very much connects to a global narrative of survival of small communities all over the World, and even provides an interesting counterpoint to the timely economic migration story, as revealed in its final third act. Hazanov’s story-telling shows a rich vein of situational humour that recalls that of Pawel Pawlikowksi’s early documentaries Tripping with Zhirinovsky (1995) and Serbian Epics (1992), obviously these are grander in scale but it will be interesting to see what Imam Hazonov makes of weightier matters himself. Clearly a talent in the making. MT