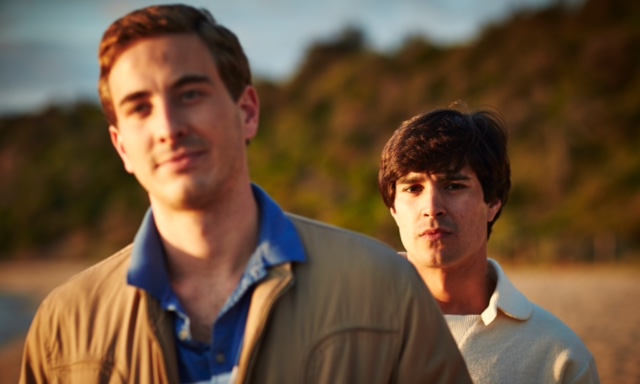 Neil Armfield (Candy) screen adaptation of Tommy Murphy’s script, based on a true story of forbidden gay love in the ’70s and ’80s Australia plays out like a heightened melodrama in tonal oddity HOLDING  THE MAN.

In Melbourne 1976,  at the prestigious Xavier Catholic College, Tim Conigrave (Corr) falls for his classmate, the Australian Football player John Caleo (Scott). The sixteen year-old boys try to hide their mutual passion, but a love letter mistakenly falls into the hands of the teachers exposing their strictly illicit liaison in a society whose penchant was for tradition and masculinity. Where Tim’s parents Mary (Fox) and Dick (Pearce) simply try to deny their son’s wrongdoing; John’s father Bob (LaPaglia) hits the roof, refusing to let the relationship develop. Tim is meanwhile keen to develop his acting skills and is having difficulty expressing the sadness required for his part as Romeo. His drama teacher gives him a hard time over this: “You lost your fiancée, not your bus pass”. Tim later moves to Sydney to attend Drama School, where his teacher (a masterful Geoffrey Rush) again criticizes his performance, this time in his performance as a monkey: “There is not much work for effeminate monkeys”. John meanwhile is training to become a chiropractor but gradually the relationship breaks down – Tim enjoying the gay life of the capital. A reconciliation leads to tragic news for both men as the drama morphs into  ultra realism, before a rather poetic ending on the Italian island of Lipari.

The main drawback of Holding the Man (a term from Australian Rules Football) is the poorly-drawn characterisation of this rather vacuous pair of men: they seem to lack any kind of moral fibre lack, particularly John, who is portrayed as a fluffy, simpering pushover, just waiting for Tim to tell him what to do – and without him, he seems to have no life on his own. John at least has a selfish streak, but not much more. This is billed as being a great, passionate love story, but the characters are so devoid of any real traits, that their homosexuality seems to be their only exceptional quality – hardly the impact Conigrave would have wished for when penning his memoir. The rather the top ‘ 70s aesthetics and cliché ridden images of DoP Germain McMicking give the film a strange retro feel, without adding anything substantial. And while the leads Corr and Scott are mostly convincing despite their poor material, their portrayal of 16 year old boys suffers from a rather too obvious age gap. Overall, HOLDING THE MAN is a missed opportunity to give voice to what clearly may have been a meaningful experience in challenging times, making it difficult for the audience to invest emotionally or feel sympathy for their struggle. AS

ON GENERAL RELEASE AT ARTHOUSE CINEMAS FROM 3 JUNE 2016