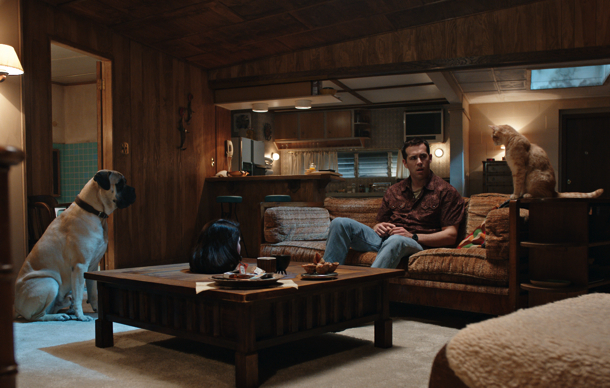 This Dexter-inspired ‘serial killer pulp thriller’ is Marjane Satrapi’s imaginative follow-up to her breakout hits Persepolis and Chicken with Plums.  There are some good ideas here, and her first film in English shows that quirky comedy can work across the cultural divide, although it’s not an outstanding success on all levels. Casting the superbly versatile Ryan Reynolds as the lead is an inspired choice: as disturbed warehouse stocker Jerry, Reynolds conveys normality with a dark side but, strangely, inspires our sympathy rather than dislike for his troubled character who is a sad victim of circumstance. Having been forced to kill his mother as a child, he wears his schizophrenic tendencies smartly tucked away behind the serene (almost autistic) gaze of an ordinary pleasant-looking guy next door. Respectably holding down his job and even volunteering to organise the entertainment at the office party; he drives a jeep and lives in a disused factory complete with pink cladding and neon signs. Not only that, he talks to his dog Bosco and cat Mr Whiskers and they talk back with accents (a Glaswegian cat and a dog with a Southern drawl are hilarious). Desperately keen to find a girlfriend, his forays with co-workers of the opposite sex, (superbly played by Gemma Arterton and Anna Kendrick) end in violent death for all concerned.

In Michael Perry’s screenplay, laughs are few but welcome in contrast to the highly inventive elements (Jerry stores the heads of his ‘dates’ in the fridge but they carry on talking) and brutal violence (stabbing his date to death by accident when pursuing her in the woods) that puncture Jerry’s volatile and psychopathic facade. THE VOICES is tonally out of kilter as an outright comedy or a horror outing; continually throwing us off-guard, not sure what to expect.- but somehow it’s an addictively watchable film with some unexpected moments of pure genius. Recommended. MT