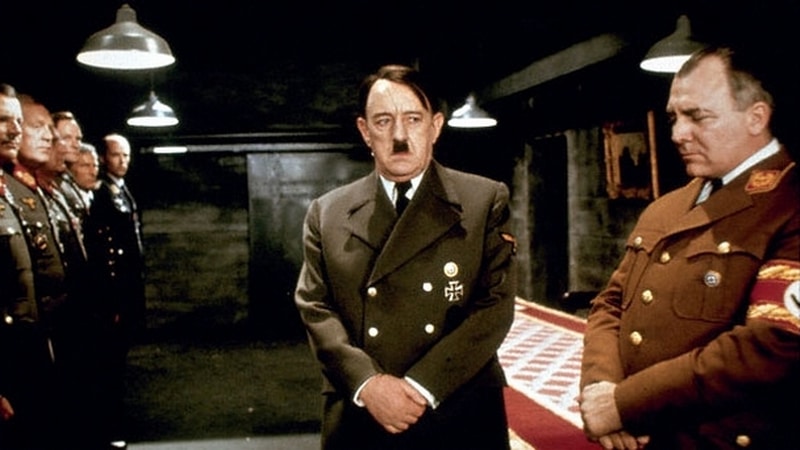 Even before Oliver Hirschbiegel’s Der Untergang (2004) became in most people’s minds the definitive big screen treatment of the last days of Hitler, this 1973 version was already overshadowed by G.W.Pabst’s Der Letzte Akt (1955) with Albin Skoda as Hitler. That said, it’s still a reasonably accurate breeze through the known facts of Hitler’s final days enlivened throughout by the succession of familiar British faces ranging from Diane Cilento’s strapping aviatrix Hanna Reitsch (who in reality was a tiny, elfin little woman) to Andrew Sachs as the notary summoned to the bunker to officiate at Hitler’s wedding; all to the accompaniment of an incongruously jolly Viennese score by Mischa Spoliansky.

Sir Alec, bless him, is marginally less unbelievable casting as Hitler than Liberace or Jerry Lewis might have been. The Führer’s legendary, carpet-chewing tantrums, for example, are wholly beyond him. Like all fictional depictions of the final days in the bunker this film fails utterly to accurately depict the doped-up, trembling, rheumy-eyed physical wreck that Hitler by then was (the famous moustache, for example, had gone completely grey); but Guinness’s frequent ramblings convey extremely well the opinionated, self-absorbed bore described, for example, by Alfred Speer in Inside the Third Reich.

Occasionally the film can’t resist putting words into the Führer’s mouth (Guinness actually uses the word “exterminate” with reference to the Jews, when in reality Hitler just left such tedious details entirely to subordinates like Himmler who actually did his dirty work and were painstakingly careful to avoid explicitly stating such things); and the final scene between Hitler and Eva Braun is particularly unbelievable. But its still worth a look. @Richard Chatten