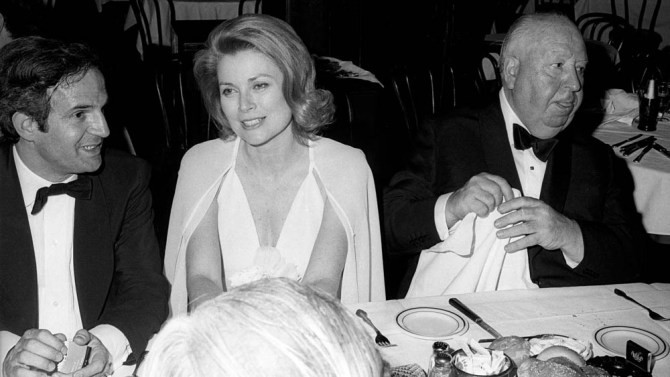 Hitchcock |Truffaut is a treat for cineastes and mainstream audiences who will appreciate a well-made documentary that gets behind the screen with two of cinema’s legends: Alfred Hitchcock and François Truffaut. In 1962, after an exchange of letters declaring their mutual admiration for one another, François invited ‘the master of suspense to take part in a filmed interview, via an interpreter, that resulted in the eponymous book that became a film bible for critics, filmmakers and cineastes alike.

Kent Jones has really excelled himself with this epicurean delight for film-buffs everywhere. Not only do we get to meet ‘Hitch’ and Truffaut but also David Fincher, Martin Scorsese, Peter Bogdanovich, Wes Anderson and other top-drawer directors opining on the subject of how Hitchcock influenced and formed them, cinematically-speaking. Hitchcock /Truffaut plays out like a masterclass in filmmaking – all in 80 glorious minutes – making you want to rush home and watch Hitch’s entire oeuvre in a darkened room.

To be fair, Truffaut, the young ‘Cahiers’ film critic turned New Wave director, doesn’t really get much of a look-in here. And fate would sadly cut short his career when he died, aged 52, in his directing prime. We see him brimming with enthusiasm as the legendary 63 year old pro holds court with his wry and witty repartee.

Kent Jones honed his craft working in television and later went on to programme the New York Film Festival before winning the prestigious Peabody Award for A Letter to Elia in 2010 and Val Lewton: The Man in the Shadows. With Hitchcock|Truffaut, he makes the valid point that the book established the theory that Hollywood fare stands up to the same kind of artistic scrutiny and attention as arthouse films that were being made in Europe at the time. Kent also shows how Truffaut wanted to release Hitchcock from his reputation as a light entertainer when actually he was very much a visually-orientated auteur who ‘wrote with his camera’ and established how filmmaking is very much about controlling and extending time while maintaining the purity of silent cinema and of the image; about creating reality from the manipulation of light and image.

The talking head interviews are informative and to the point; never outstaying their welcome: Olivier Assayas, Kiyoshi Kurasawa, Arnaud Desplechin, Paul Schrader, James Gray, David Fincher and Wes Anderson, all giving succinct pearls of wisdom on how Hitchcock and Truffaut inspired them on the subject of filmmaking and directing. Fascinating footage and clips from both Truffaut and Hitchcock’s films will further add to the cinematic allure and have you trying to guess the identity of each film.

Jones then proceeds to analyse, at some length, Vertigo and Psycho, while offering insight into Hitchcock’s own psyche, and showing how Psycho was a game-changer in the history of modern filmmaking, ushering an era of uncertainty and marking a paradigm shift in perceptions during the early 60s a time of public insecurity as a result of the Vietnam War. Kent shows how the interview left Hitchcock re-considering his controlling methods of working with actors (“Actors are the cattle”) such as when he ordered Monty Clift to look up to the Hotel (in I Confess) when Monty considered it vital to look at the crowd. Hitchcock’s will prevailed but this leads us into another interesting debate.

There is a voiceover narration from Bob Balaban (Close Encounters) which accompanies the documentary, making this an invaluable and complex piece of filmmaking useful both as an academic tool and an absorbing and fact-filled addition to the documentary archive on Hitchcock. MT

OUT ON GENERAL RELEASE FROM 4 MARCH 2016