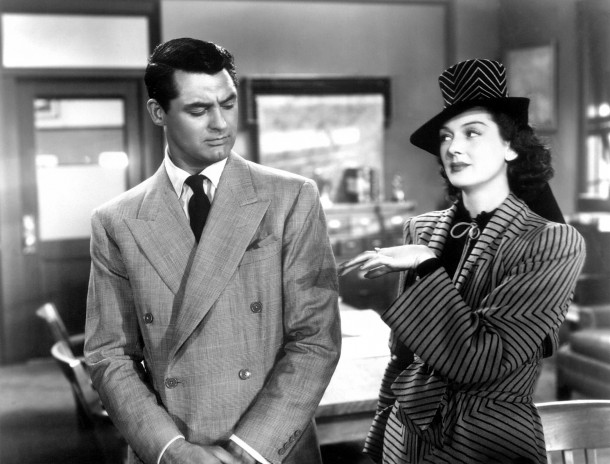 Based on the 1928 play by Ben Hecht and Charles McArthur, Hawks’ version was a remake of the 1931 film directed by Lewis Milestone, starring Adolphe Menjou and Pat O’Brien as the Chicago newspaper editor and his ace-reporter. Changing the gender of the reporter from male to female turned out to be stroke of genius by Hawks, coming about by pure accident, when he had a female dinner guest read the lines of the original male reporter character.

Walter Burns (Grant), the editor of the ‘Chicago Morning Post’ is losing his ex-wife Hildegard “Hildy” Johnson (Rissell), who is going to marry the insipid insurance broker Bruce Baldwin (Bellamy). Burns does everything to sabotage the marriage, and when (wrongly) a convicted murderer and anarchist Earl Williams escapes from jail he knows that Hildy will prefer this “last” story to life as wife and mother in peaceful Albany/NY with Bruce. Walter and Hildy hide Williams in a roll-up desk in the newspaper’s office. William’s girlfriend Molly Malloy (Mack), sacrifices herself for him, jumping out of the window, to keep the attention of the searching police officers away from Williams hiding place. Burns has Baldwin arrested for petty crimes, and Hildy has to rescue him and his mother from the police more than once. Finally, Bruce gives up and after Williams is pardoned, Burns swears eternal love, and promises Hildy a honeymoon at the Niagara Falls – just en-route of a headline promising mass strike.

When Hawks discussed the idea of re-making the Milestone film with a woman as the reporter, the Columbia boss Harry Cohen called him “nuts”. But when the director threatened to leave, Cohen relented: “I know you well enough not to try and tell you how to make pictures”. HIS GIRL FRIDAY not only made a made handsome profit, but broke all records for the “fastest dialogue” in film history. Whilst the average ‘words per minute’ in films is about 90, HGF clocked 240 words. Hawks, always treating challenges as sporting events, “arranged a showing to the newspapermen, and we had the screen split in two parts. We ran the one picture [the 1931 Milestone version] on one and our picture on the other, and they said ‘My God, your picture is so much faster than the other’ ”.

Not that filming went without a hitch – Rosalind Russell, who was about the seventh choice for the role (first choice Carol Lombard was far to expensive for the penny-pitching Cohen), felt unfairly treated “as an also-run” by the director. Once she told him angrily “you are stuck with me now”. Russell and Grant also competed with each other, add-lipping their own gags. But the tension between the leads proved to be beneficial for the movie, and DoP Joseph Walker re-captured the tense atmosphere of Only Angels have Wings in a less dangerous, but still very competitive environment for a gender war fought with words sounding like machine guns. After more than 75 years, HIS GIRL FRIDAY is still one of the greatest screwball comedies of all time. AS

AVAILABLE ON BLURAY COURTESY OF CRITERION UK FROM 9 JANUARY 2016 | EXTRAS INCLUDE THE BLURAY RELEASE OF LEWIS MILESTONE’S 1931 THE FRONT PAGE.