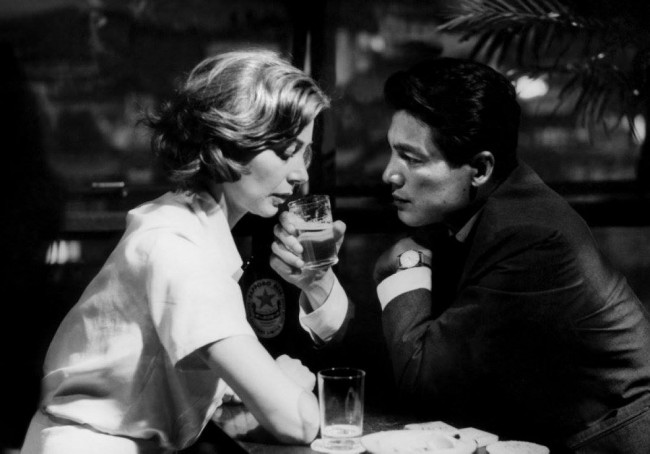 HIROSHIMA MON AMOUR is widely considered the first ‘true’ film of the French Nouvelle Vague, Yet Alain Resnais’ romantic drama is in many ways very different from Godard’s Au Bout de Souffle (1960) – Resnais’ debut is much closer to Andre Bazin’s description of an ‘impure film’, compared with those of his collaborator’s of the movement: Godard, Chabrol, Rohmer or Truffaut.

For a start Resnais’ approach was more radical, and he moved much further away from the classical film structure than the other directors in French New Wave movement. According to his script collaborator Marguerite Duras :“he asked me to write literature, forget the camera. His idea was to film my script like a composer treating a piece of writing – like Debussy did with Materlincks ‘Pelleas et Melisande’ ”.

The only requirement from the Japanese co-producers was that one episode of the film be set in Japan and the other in France. Françoise Sagan was approached to write the script but she showed no interest. Duras and Resnais agreed that no contemporary film about Japan could be made without mentioning Hiroshima. Since the Japanese film “The Children of Hiroshima” had said everything what was to be said about the horror of the first nuclear bomb, Duras tried a very a different approach: Her script was more or less a permanent dialogue, or better, two monologues, which only rarely become a true dialogue.

A French actress (Riva) and a Japanese architect (Okada) meet in Hiroshima and spend a night together in her hotel room. They make love and he tries to keep in vain her for a few days longer in the city, but they are both married and their relationship has no future. During the night, she remembers her first love: a German soldier (Fresson), whom she loved in her hometown of Nevers, and who was shot on the day of the city’s liberation. As a punishment, her hair was cut by enraged citizens and her parents (Dasas/Barbaud) hid her in the cellar. Basically, their meeting in Hiroshima is a discourse about time and forgetting: She has forgotten Nevers, as she will Hiroshima and this love of her: “Je t’oublierai, je t’oublie deja! (I will forget you, I’ve already forgotten you”) she tells her lover.

Hiroshima, Mon Amour is not a film about a war, or about love. It is a film about the actor’s two lovers: both of the relationships are defeated (in different ways) by war. War only intervenes in short scenes, but it dominates the life of the actress; it has formed her, like her two lovers. The most important aspect of the film, is not its moving images but the photographed emotions. This way, the scenes in Nevers are not ordinary flash-backs, but moments of a memory which is short: as shown in the parallel montage of the hands of the German soldier: first when they are in bed, than after he has been shot. But immediately we flash back to the hotel room in Hiroshima. Sometimes to the two levels meet: after the camera travels through the streets of Hiroshima, we are suddenly confronted with a street sign in Nevers. This is not about the two cities, but the actor’s struggle to remember and forget. Resnais’ next two films Last Year in Marienbad and Muriel, Hiroshima is a thesis on time and forgetting, exploring the function of memory very much like Marcel Proust did with In Search of Lost Time.

Riva and Okada are impressive, their understated ‘non-acting’ perfectly cohesive with the “gliding” black and white images of Saché Vierny and Michio Takahashi; and Georges Delerue’s mourning score: whilst other directors of the Nouvelle Vague wanted to liberate film from theatre and literature, Resnais wanted to create film as a medium that encompassed other art forms. AS

WINNER OF THE INTERNATIONAL CRITICS’ PRIZE CANNES 1959 | RELEASED ON BLU-RAY FOR THE FIRST TIME ON JANUARY 18TH, 2016