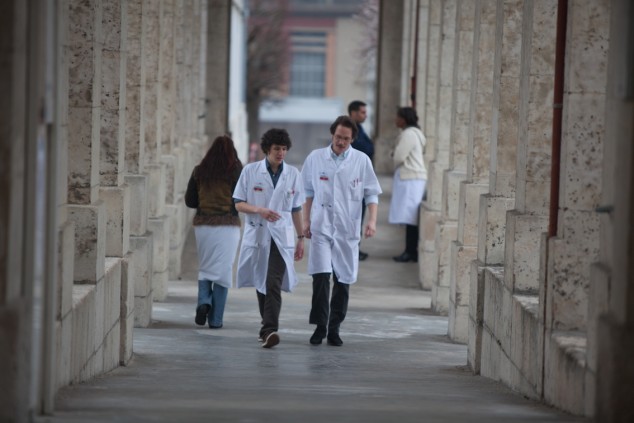 Reda Kateb (Abdel) and Vincent Lacoste (Benjamin) are the stars of this docudrama that follows the early internship of two young doctors in a large Paris teaching hospital. The warts and all portrait evokes the grisly dark humour that doctors often resort to (together with alcohol and cigarettes) to lighten their gruelling daily grind in a career which, as portrayed here, is very much a vocation and a labour of love. Hippocrates was the ancient Greek physician who gave his name to the code of conduct by which doctors live their professional lives and this sophomore feature from writer-director (and Doctor) Thomas Lilti.

At first Benjamin imagines this as a glamorous profession but as the days go by, in his six month stint in a department run by his father Prof Barois (Jacques Gamblin), the vulnerability and humanity of the patients (all played very movingly by an superb support cast) gradually persuades him otherwise.

Scenes of rowdy camaraderie with his colleagues in the common room punctuate more poignant moments of where we see patients suffering extreme pain and anguish and we soon discovery that the medics cover each other’s backs much in the same way as the Policemen portrayed in Precinct Seven Five. More sadly, older patients are not given the same chances as the younger ones and often patient care is managed according to the availability of beds and equipment, rather than the clinical requirements of the sick.

That said, Abdel (Kateb) goes out on a limb for the patients in his care offering them personal succour. A highly experienced immigrant doctor from Algeria, he is unable to be promoted due his lack of papers. Fully aware of this callous system, he tries to do his best for the patients, often going into ethical conflict with his superiors, and in particular, Dr Denormandy (Marianne Denicourt), the registrar of the department.

That public health provision is under-funded and over-burdened is nothing new and director Thomas Lilti, brings his experience at the coalface to bear in this gripping and affecting tale which explores how medics are worn out and demoralised leading to a volatile standoffs between staff and management. And HIPPOCRATES shows how the French medics are more vocal than their more tolerant UK counterparts. The situation goes from bad to worse in the final scenes where Benjamin and Abdel find themselves faced with a life-changing decision.

Reflected in a steely visuals of Nicolas Gaurin (Bright Days Ahead) HIPPOCRATES is hard-edged, its caustic humour authentically evoking real life. Kateb is dynamite is a likeable and sympathetic doctor who wears his smirking contempt for his seniors as a badge of honour on his white coat, show that when it comes to care-giving our immigrant workers often embody a sense of commitment and compassion that is sometime lacking elsewhere. Their much needed skill and approach is often  hampered by their status, whereas Lacoste is sulky and clearly out of his depth, lacking the life experience and common sense to compliment his medical training. MT