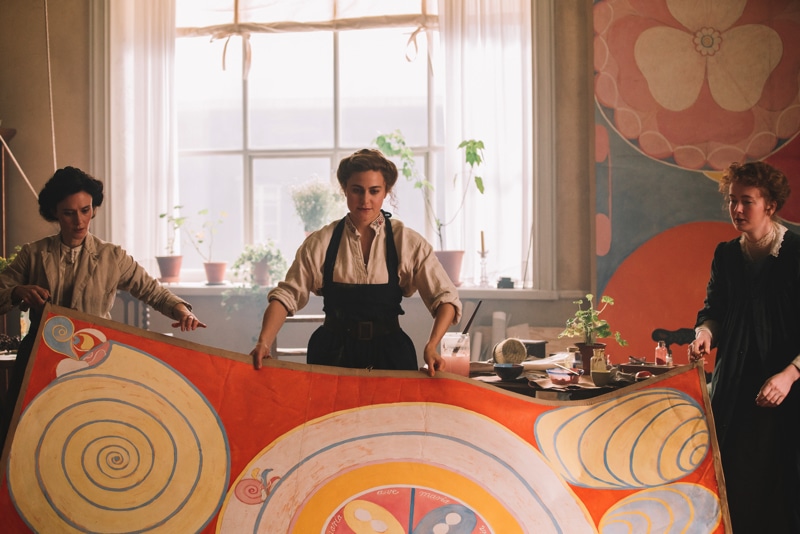 In this artful family affair Lasse Hallström casts his daughter Tora and wife Lena Olin as the pioneering avant-garde Swedish painter and mystic Hilma at Klint (1862-1944) recognised as being one of the first and foremost abstract painters, before Kandinsky, Malevich and Mondrian.

The elegant painterly styling certainly suits this English language biopic drama about a creative spirit who was developing her ideas sexually and artistically in upmarket Stockholm at a time of rapid artistic change at the turn of the 20th century. The European creative community in general was embarking on a quest for psychological truth and exploring the unconscious through their work, and Hallstrom reflects on Hilma’s evolving modernist style and spiritual leanings in his inspired direction and Ragna Jorming’s floating images and fluid camerawork that echo Hilma’s radical progression from her student days to accomplishment as a full-fledged artist. The focus here is the spiritual inspiration that drives Hilma’s creativity, and her turbulent relationship with the landscape artist Anna Cassel (Chalk).

The film opens with the death of her little sister Hermina (Emmi Tjernström). Their deep spiritual bond would go on to be an inspiration throughout Hilma’s working life. Born into a noble but not wealthy family Hilma’s mother stresses the need for her daughter to find a husband rather than dabble in the dilettante world of art, where only men were considered painters, and even enjoyed an exclusive entrance to the Royal Academy in Stockholm where Hilma studied classical drawing and painting techniques.

Hilma then struggles against a tide of negativity due to the very nature of her radical style and makes no bones about revealing how the spirits inspired her to paint, an approach considered outré and highly questionable back in the day. And to be fair, she does bang on about it almost evangelistically rather than play it down as a subtle and enigmatic adjunct to her talent. She is obsessed with the Austrian philosopher Rudolf Steiner, and shares her spiritual ideas with him to little avail despite his admitting to receiving messages from the soul through the medium of colour.

Lasse Hallström’s well-crafted film will certainly appeal to art-lovers. Although Hilma herself remains an acquired taste, brilliantly portrayed in an impressive double act by Tora Hallstrom and Lina Olin who trace the artist’s life from her early twenties to her late middle age. MT