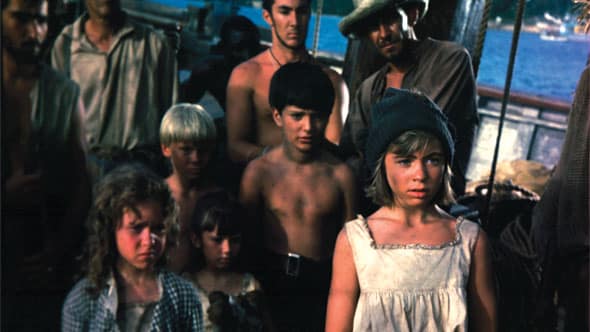 The last film of true substance in the ill-fated directorial career of Alexander MacKendrick rather tones down the bleakness and ferocity of Richard Hughes’ 1929 novel, but is still faithful to MacKendrick’s perennial them of the dire results when amoral youthful innocence crosses the path of adult venality.

The Thorntons are a British family living in Jamaica in 1870. When they decide to send their children back to England for a proper education, the long journey home quickly turns into pandemonium when a pirate ship, led by Capt. Chavez (Anthony Quinn), attacks their vesselThe kids in this film follow in the tracks of Sydney Stratton in ‘The Man in the White Suit’, Mandy, Sammy in ‘Sammy Going South’ and even Mrs Wilberforce in ‘The Ladykillers’.

The film offers the novelty of a miniature version of Martin Amis as one of the children and a surprisingly traditional score by Larry Adler with not a harmonica in sight. @RichardChatten