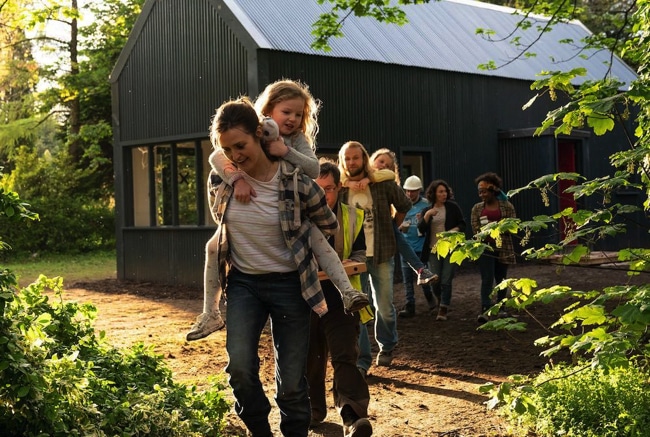 It certainly helps to have friends in high places according to this utopian crowdpleaser that sees an abused wife and mother making a new start with her two girls in Dublin.

Playing out like an uplifting female-centric companion-piece to I, Daniel Blake this is a film along similar lines and is certainly better crafted than Ken Loach’s flung together social realist agitprop, that bizarrely went on to win a Palme d’Or.

Herself is the latest from English director Phyllida Lloyd who is best known for her blockbusters Mamma Mia and Iron Lady. Newcomer Clare Dunne co-wrote the script based on her own life experience, she is also impressive as an idealistic but enterprising home-help called Sandra who finally comes to end of her tether marriage-wise after a violent set-to with her troubled husband (Ian Lloyd Anderson). From the safety of an upmarket hotel room (courtesy of social services) she decides to make a new home for herself and her daughters after seeing a self-build model on the internet.

One good idea leads to another and the project gains momentum when her wealthy boss Dr O]Toole (Harriet Walker) offers to lend her the £35k – the good doctor became close to Sandra’s mother, her longterm domestic and support. Soon a motley crew of friends and tradesmen band together to help Sandra realise her dream, enjoying the camaraderie of this self-help exercise and the buzz it generates all round. Naturally the project doesn’t run smoothly and febrile flashbacks to the grimness of Sandra’s former life with her nasty husband counterbalance the saccharine scenario of the present.

Predictable in its cheesy outcome and off-the-peg characterisation this is a cheerful life-affirming film that also manages to combine a feisty courtroom segment with the false bonhomie of the home-building effort just for good measure. MT