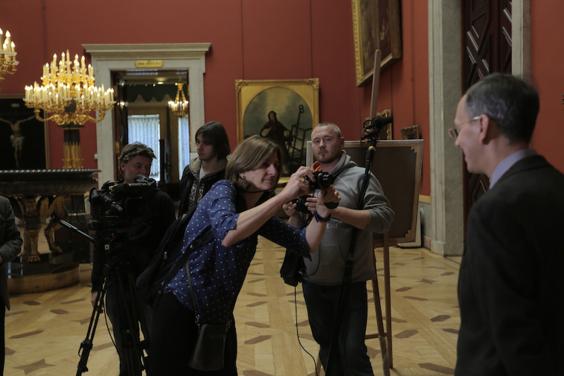 Founded 250 years ago in 1764 by Catherine the Great, the Hermitage in St. Petersburg is one of the largest and oldest museums in the world, housing three million treasures. The Hermitage, and the adjoining Winter Palace (opened in 1766 as a museum) were also the homes of the Russian Tsars, until the revolution of 1917.

Margy Kinmonth (Looking for Lowry) guides us through these astonishing buildings with the help of the current director Mikhail Piotrovsky (since 1990), whose father Boris held the same position before him.  As a young boy, Mikhail (played by a young actor) frolics through the vast building, as  enthralled adult visitors look on. Piotrovsky attempts to take a balanced and detached view of the history of this museum. The founding monarch, Catherine The Great, came to power by a coup-d’etat, non unlike the Bolsheviks, who would end the Romanov dynasty in 1917. Catherine was a prolific collector, apart from her ‘private’ collection of gems and cameos (10 000), she amassed over 4000 Old Masters, among them the famous collections of Brühl (Lower Saxony), Crozat from Paris, Robert Walpole from London and Count Baudouin from Paris, including Rembrandt’s, Michelangelo’s and Da Vinci’s.

The old Winter Palace burned down in 1837, but the Hermitage was saved. It took only a year to rebuild the Palace, “but many serfs lost their lives”, according to Piotrovsky. Next time the Winter Palace was in the news, it was 1917 and the Bolsheviks arrested the “Provisional Government” in a room in the Palace. “The Bolsheviks were much less vengeful with the art treasures than the French revolutionaries before them. They just raided the wine cellars”. In an ironic twist, the Winter Palace was much more damaged by Eisenstein’s filming of “October” (1927), than the actual fighting ten years earlier. The Hermitage director chides Stalin for selling off many famous paintings to the USA (in exchange for factory equipment), but saves his most vitriolic comments for the Germans, who encircled the city during WWII, starving them and killing a third of the population. “There were no noble German officers here, unlike in Florence, they wanted to destroy the whole of Leningrad. It was culture against anti-culture”.

Most of the treasures had been stored elsewhere, like in WWI, ironically some of them in the very house in Yekatarinburg (Sverdlovsk), were the Tsar and his family were shot. Today – not unlike in The National Library of Russia in the same city – artworks from different periods live peacefully side by side: Post-Impressionism, (shut away by Stalin), post-revolutionary Art-Nouveau and modern sculpture including pieces by Rodin. HERMITAGE REVEALED is indeed a fascinating foray into this treasure trove of world art, and Maxim Tarasyugin’s vibrant cinematographer brings it all to life  with some dispassionate commentary provided by Tom Conti (as Pliny the Elder) – but overall it is a little too conventional; too balanced, crushing the tragic, blood-filled history of hundreds of years under its bombastic grandeur. AS