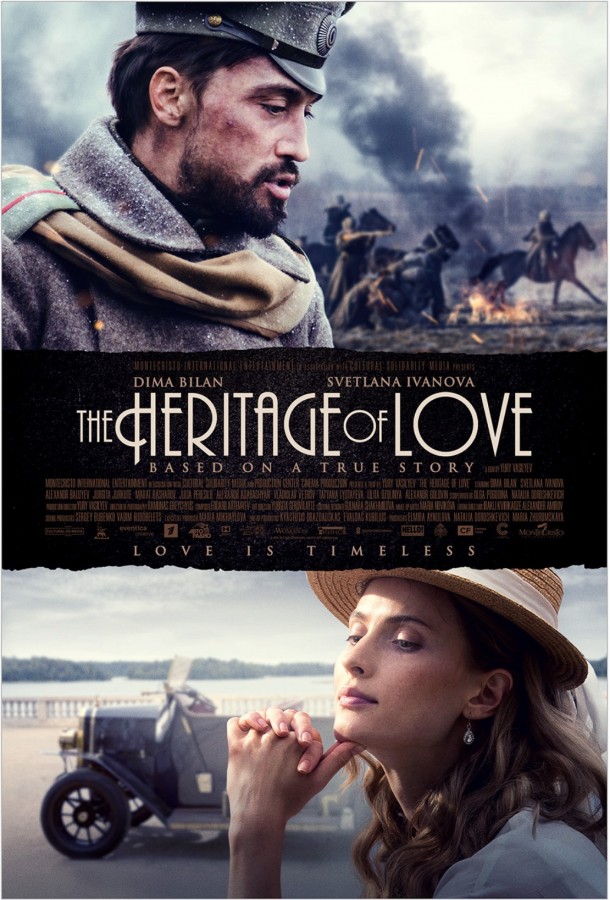 Some films are difficult to take seriously – and Yuriy Vasilev’s Heritage of Love, starring the Eurovision Song Contest winner Dima Bilan, falls into this category. A hotchpotch of advertising show reels make up the narrative – by Natalya Doroshjevic and Olga Pogodina-Kuzmina – so phony, that even Leni Riefenstahl would have asked for a re-write, probably resulting in a turgid melodrama.

Set a hundred years apart, this ‘eternal’ love story plays out between Andrey (Bilan) and Vera (Ivanova) in 20th century and the present day. We first meet the doomed couple near St. Petersburg in 1914, when princess Vera hangs out in a tree near the royal palace, chided first by her sister – for jumping out of the tree; then later by her mother, who wipes a speck of grass from her face, calling her “dirty as a street urchin”. The little tear-away is very much Daddy’s darling, and her father has just bought a new car, a Russo-Bolt, which will feature again in the film’s contemporary setting of Paris. After some officers re-enact the William-Tell scene with a hapless private on the estate of the Royals, captain Kulikov arrives just in time to admire Vera dancing happily in the water fountains and hear about the outbreak of the First World War.

Later, when the war seems to be lost, and the October Revolution is around the corner, the perfidious Tershenko (Baluev), a suspicious merchant, upsets the aristocrats (Vera is working as a nurse in a very clean field hospital), with talks of their deserved doom. He is in love with Vera’s sister Irina (Jurkute), but she looks down on the “shopkeeper”, who confesses ”you are the meaning of my life”. This meets with derision with Irina’s response  “I hate you” – leaving him rather on the spot.

Meanwhile, Andrey has joined the White Army fighting the Reds, were he succumbs to a bullet, sacrificing himself for a superior. Those still interested (and able to tolerate the creaky performances) should know that the evil Tershenko-look-a-like bribes Andrey, and sends the him to contemporary Paris in order to swindle a Russian duchess (sic) out of a Russo-Bolt, which is priceless. Andrey meets Vera, when the she causes a flowerpot to drop from her balcony onto his head….

Heritage of Love was shown at the Marche du Film at Cannes this year. We learn from press releases that “industry professionals warmly received the film; some wept whilst watching”. We are also informed, that Dima Bilan “arrived in Cannes for the theme party on board a yacht”. He cheerfully greeted those attending the ‘premiere’ aboard the yacht, which was designed in the style of the movie: characters’ costumes (incl. blue Bilan’s uniform, memorable from the movie) and seamen’s caps sporting the words “The Heritage Of Love” (this is the international name of the picture), as songs of Dima Bilan ringing out through the festivities, accompanied by French wines – the reception was a success!” Shame about the film. AS