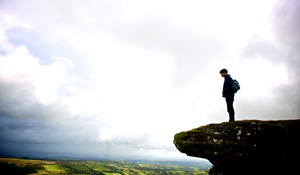 Set in the idyllic Wye valley, this coming-of-age romance between a “tough” inner city girl, Grace (Johns) from East Ham, and the rather introvert Say (Rush), whose grieving hippie mother projects even more gloom on to him, is believable as far as the psychological interactions are concerned – but there is simply too little of a narrative, and endless nature shots, however pretty, do not make up for it. Grace, whose parents are trying to save their crumbling marriage with a few summer weeks in the countryside, is totally displaced in the small village, surrounded by woods and fields. She obviously does not see the beauty, but longs for the city. Say, on the other hand, is very much at home, using nature to heal his inner turmoil, he escapes from his demons into the countryside, which he sees as much as liberation, as Grace feels alienated in her new environment. There is a group of white, racist hooligans who eventually beat Say up, but they are too peripheral to make any difference. Grace’s parents spend the time arguing loudly, but it is never quiet clear what the main conflict – apart from money – is, a little concrete information would have helped. The same goes for Say’s mother, who is always withdrawn, never opening up.

HERE AND NOW is lacking a structured narrative, instead we have episodes which are very engaging but leave us too much guessing. Apart from the convincing leads, all the other characters are only fragmented and one longs to know more of them. The rather flat ending is equally disappointing, leaving the audience with the impression that the filmmaker has run out ideas. The camera work is by far the strongest component, with beautiful (but never cloying) panoramic shots and sensitive close-ups. But overall, the sometimes entrancing atmosphere cannot make up for the lack of an engaging, gripping narrative, which, in turn, leaves us loosing (unjustly) interest in the protagonists. The low production budget is not an excuse for a script, which needed much more development and fuller characterisation to make this drama engaging. AS