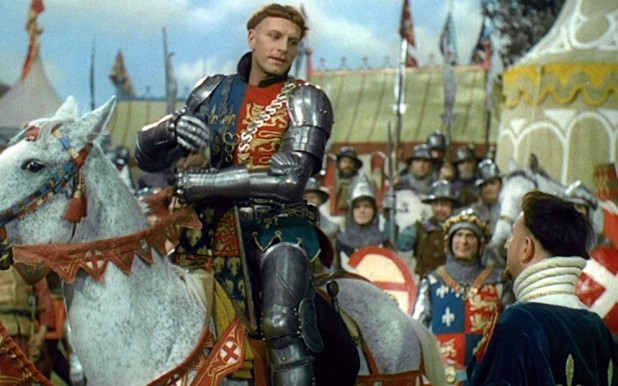 Laurence Olivier’s 1944 version of Shakespeare’s Henry V is greatly enhanced by the cinematography of Robert (The Third Man) Krasker. His use of Three-Strip Technicolor gives the sets (some of them pretty cardboard now) and costumes which although a bit too grand for modern taste give the film a lustre as in the illustrations for a Gothic medieval manuscript. These very bright visuals were right for the film’s depiction of pomp, pageantry and warfare: Henry V was morale-boosting propaganda for wartime Britain. Its production and release coincided with the Allied invasion of Normandy. The film did well at the box office and pleased the critics. Even Winston Churchill praised Olivier for his efforts.

Yet propaganda aside, this history play became a landmark Shakespeare film. When Leslie Banks (as the chorus) says: “Still be kind and eke out our performance with your mind.” the camera tracks into the lit room of an inn. The film’s delightful opening 30 mins (mainly describing the reasons for going to war with France) is replaced by urgent cinematic action. By staging Henry V in a reconstruction of the Globe theatre, and then branching out to more elaborate stylised sets and filmed location work, Olivier realised an imaginative transition from theatre to cinema. Henry V was probably the first Shakespearian adaptation to satisfy both theatregoers and filmgoers of the 1940’s, providing a populist, even déclassé experience for both groups.

The film’s battle scenes have now acquired a classic status. Walton’s expressive music, synchronised with the whoosh of arrows fired by English archers, makes for an exciting battle of Agincourt. Whilst the well executed medium shots of men charging into battle is exhilarating. Yet this is a much cleaned up fight. The muddiness, cruel absurdity and ugly slaughter of Welles’s Shakespeare film Chimes at Midnight is not to be found. Olivier’s stress is tidy propaganda – a necessary battle of heroic determinism. Tragic violence is given a brief postscript when the weeping Fleuellen (Esmond Knight) holding the corpse of a dead boy, states “this is expressly against the law of arms.”

Olivier’s performance is passionate and heroic. He carefully reveals the King’s heroism, but irritatingly (for me) erases Shakespeare’s doubts over a young man’s ambivalence towards responsible kingship. Olivier remains untroubled and over – confident throughout the whole film. But this was wartime and he had to create an inspiring patriotic hero to beat the Nazis. As for rest of the acting, Felix Aylmer (Archbishop of Canterbury); Robert Helpman (The Bishop of Ely) and Renee Asherson (Princess Katherine) are outstanding. This is not the case with Harcout Williams (King Charles V1 of France) who plays him as a sick scatter-brained ruler that approaches caricature. Robert Newton (Pistol) is the
worst, delivering a rather hammy performance as a working class rogue.

Henry V is a really entertaining film that undoubtedly glosses over the complexity of the play. The winner of the Oscar Honorary Award in 1947 for Laurence Olivier, it provides an ideal companion piece for Kenneth Branagh’s 1989 film and, naturally, the stage production. But Olivier’s irresistible enthusiasm and energy still shines through. ALAN PRICE.