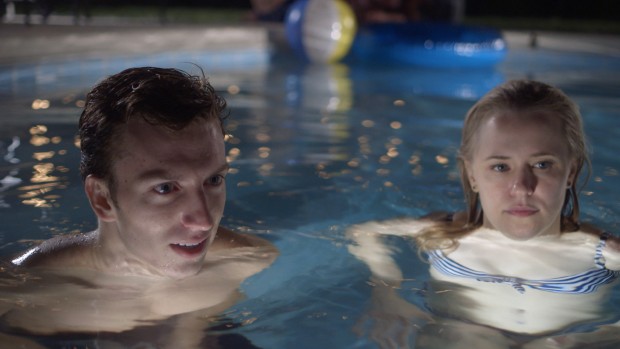 Stephen Cone made his name with multi-awarded breakout drama The Wise Kids. Still only 35, his 7th feature is a coming-out story that revolves around a family swimming pool party in upmarket Chicago where the aponymous Henry is celebrating his 17th birthday.

In this die-hard Christian community, Henry’s parents and the huge majority of guests and friends are born again Christians, their lives guided by (often ostentatious) thankfulness to the Lord – or so it seems. We meet Henry (Doman) for the first time on the eve of his birthday, in bed with his best friend Gabe (Keery). The boys masturbate, Gabe enthusiastically enumerating the sexual high points if he could seduce the class-beauty – but it soon becomes clear that Henry’s sex object is lying next to him. The next day’s birthday party starts off on a dull note; the adults gossiping about goings-on in the church, where Henry’s father Bob (Healy) is a pastor. But the tempo soon changes when stunning beauty Christine (Neilan) arrives, the boys hanging on her every word, and it’s clearly not Gospel. Meanwhile, Henry’s sister Autumn (Ganet), is still coming to terms with the big wide world outside the God-fearing community, after her first year at college – she is also angry with her boyfriend who had somehow talked her into losing her virginity. Then there is Henry’s friend Ricky (Andreas) who had “got aroused under the showers when seeing the bodies of his mates”. He later tried to commit suicide, and at Henry’s party he locks himself in the bathroom and disfigures his face with a razor. Finally, it emerges that Henry’s parents also have a skeleton in the cupboard: his mother Kat (Laidlaw) had an affair with a popular church leader (now dead) his widow Bob in reminiscing about his ‘great character’. Although Bob has forgiven Kat, she wants to move on, but being the sole family member in on her son’s sexual orientation, she asks her husband to give Henry his blessing.

In this rambunctious drama Cone impressively captures Henry’s hypocritical family background, but tries to involve too so many sub-narratives that Henry’s story submerges below the water line. What floats on the surface is his shyness, verging on blandness, and it’s never clear whether Doman, choses to plays him meek and mild or whether he truly is an emotionless cypher. While everyone else is rising to the bait, Henry seems un-engaged, almost distant. Cinematographer Jason Chiu echoes this mood with some insipid visuals, bringing a suitably voyeuristic feel to the underwater scenes. While empathetic to Henry’s feelings, Cone never really delves into wider implications of the issue, preferring to sketch out a story involving a series of social stereotypes. At such HENRY GAMBLE’S BIRTHDAY PARTY works better as a treatise on life in a devoutly Christian community, than as an involving drama of sexual awakening. MT