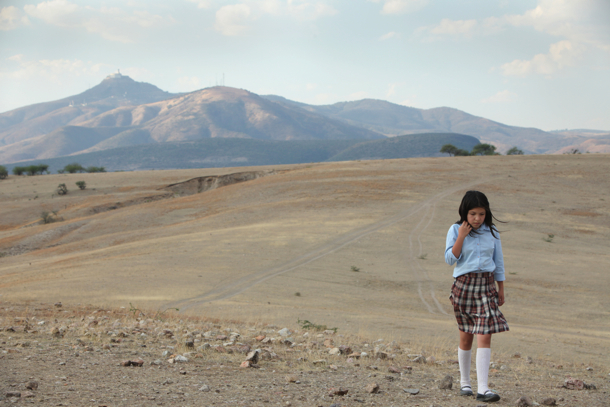 Cruelty goes hand in hand with beauty in this savage crime thriller from Mexican filmmaker, Amat Escalante. Set in the wide windswept countryside of Guanajuato, it won Best Director at Cannes and tells of an ordinary family brought to its knees in a country riddled with drug crime and corruption.

Heli is a young factory worker living with his wife, baby son and father in a ramshackle hut.  His 12 year-old sister is dating a cadet soldier, Beto, who’s stolen some cocaine and hidden it in a water tank on the roof.

The film opens with a man hanging from a bridge, a group of wasters look on from a tatty sofa, taking turns to use a brick bat to hit him, and there’s worse. Tortured cries echo as a woman makes tea in the kitchen nearly.  As the story plays out, it bears witness to the cadet’s foolish action which unleashes a series of appalling atrocities (genitals aflame, puppies crushed) in a society where men are men and women are proud, no one plays fair.

Escalante’s direction is calm and composed reflecting this crooked society capable of great brutality but also acts of loving care and support between family members. MT