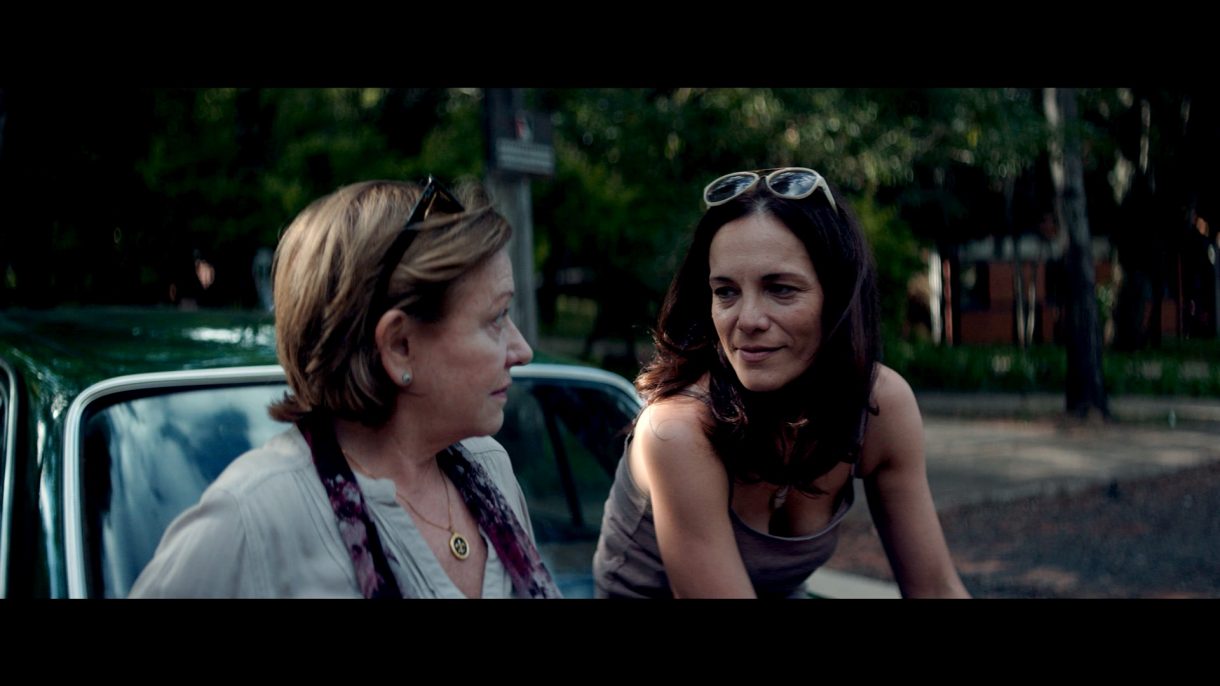 Living in reduced circumstances in a well-appointed but shabby apartment in the capital Asuncion, Chela (Brun) has been forced slowly to sell off her prized heirlooms in legal negotiations handled by a trusted friend, Carmela (Alicia Guerra), to save her debt-ridden but considerably more jovial partner of 30 years Chiquita (Irun) who is threatened with a spell ‘inside’. Martinessi’s elegant script enigmatically weaves tentative romantic undertones and female solidarity into his texturally rich and atmospherically evocative storyline often transporting the introspective Chela into a dreamlike reverie consistent with her daily dabbling as a painter.

But an unexpected request from her more flush and considerably less guarded next door neighbour Pituca ( Maria Martins) ushers in a gradual change of circumstances allowing Chela to step out of the sidelines and into the limelight as she slowly regains confidence and a new sense of direction availing herself of a long disused Mercedes to ferry local ladies who lunch to and from each others homes for games of bridge and social tittle tattle. And it is during these leisurely afternoons that the drama gains a gently humorous twist and an opportunity for Chela to broaden her social and romantic inclinations, and to come into contact with the languorously seductive Angy (a feline Ana Ivanova).

Delicately drawn in subdued tones and sombre interior settings The Heiresses is an intimate female-centric affair that draws seething suspense from its hauntingly enigmatic minor-key and acutely observed characterisations of the former elite going about their elderly lives in leafy and affluent Asuncion. But danger is never far away in the over-crowded streets and backwaters of the city.

Men are absent but frequently alluded to in invariably dismissive or even derogatory tones: for what they haven’t done or have done badly, not only on a personal but on a national level. By definition women have learnt to be resilient, forbearing and generally self-reliant and there is considerable warmth and solidarity amongst them, and even though the usual bouts of bitchiness occasionally creep in they are tripped over lightly and soon forgotten. The gay pair have ceased to be close in the intervening years of financial hardship (“have you used my toothbrush again” Chela chides Chiquita) but still cling fastidiously to their routines and rituals: the hair coiffed and perfumed; the jewellery proudly displayed; the morning coffee meticulously prepared and served by the willing housekeeper (Nilda Gonzalez), each cup and accoutrement in its correct place or there’s hell to pay. And it’s these rigorous daily moments that hold their lives together, while everything seems to be gradually falling apart.

Chiquita’s eventual spell in the local women’s prison provides seamy contrast to their sedate life behind domestic doors where the splendour of yesteryear is reduced to ghostly shadows and peeling paper on the wall where once hung masterpieces and family treasures. And when Chela mobilises the ancient Mercedes there’s still a certain diffidence until she gets herself back into gear. But soon her distant memories of the glory days seep back as the casual nonchalance of Angy’s feral joie de vivre proves intoxicating. And it’s here that The Heiresses draws comparison with Sebastian Lelio’s Gloria, as Chela’s slow but sure emergence from emotional confinement finally starts to emerge again quietly but defiantly in this nuanced, slow-burning but compelling drama. MT

NOW ON RELEASE NATIONWIDE FROM 10 AUGUST 2018