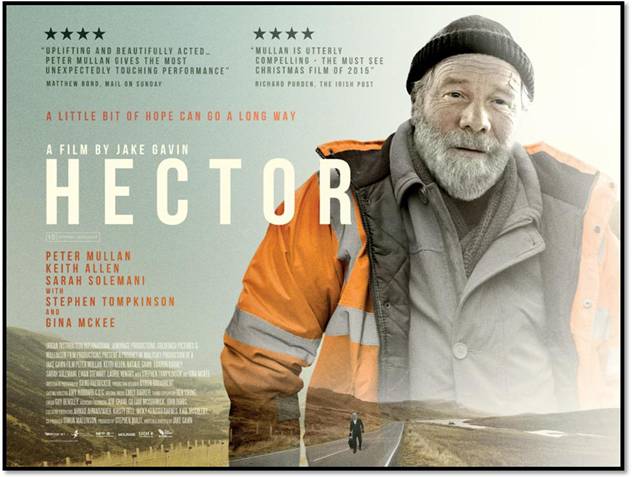 First time writer/director Jake Gavin portrays homelessness as an everyday reality and a lifestyle choice for HECTOR played here by Peter Mullan who carries this entertaining British indie with gusto and style.

We meet Hector for the first time in a Glaswegian hospital in the run up to Christmas where  he is being told to come back after the holidays for a non-specified operation. This might or might not be related to the fact that he walks laboriously on crutches. His travelling companion Jimbo (Keith Allen, sardonic and true to type) is a veteran of the roads, along with 18 year old Hazel (N. Gavin). They split up, planning to meet in London for Christmas, whilst Hector visits his (not particulary sympathetic) brother-in-law, a manager in a car showroom, to get into contact with his sister Lizzie (McKee), with whom he had no contact, after leaving their home abruptly fifteen years ago. Rebuffed by her, Hector makes his way down to London to meet the rest of the trio, but it comes as no surprise that Christmas doesn’t go according to plan.

Gavin’s narrative, full of well-observed details, is told in a detached, candid typically English way: nobody complains, the travellers know better than to make a fuss; life is seen as inherently difficult at this level and dealt with as matter of fact: sometimes Hector gets lucky (when he arrives too late for the Christmas shelter, but is saved by Sara), sometimes he is literally kicked down by a couple of hooligans, who want to steal his bag – but a bat-swinging Indian shop owner fights the attackers off. The reason why Hector leaves his middle-class life never properly emerges although there are a few clues there are only a few clues: Hector blaming himself for the death of two children in a road accident, which he believes, he could have prevented. The guilt drove him out into the streets, but his self-loathing and –punishment are only part of the story – perhaps he just wanted out.

DOP David Raedeker’s avoids full-on hyper-realism, using long panning shots, framing the protagonists in carefully constructed frames. The audience gets used to the roads were Hector and his friends hitchhike – mainly on the motorways – and are finally seen as sort of stations. Everything is low-kew. Mullan is brilliant, but the ensemble acting is equally inspired. HECTOR is labour of love, a welcome variation on the narrative-less British films which seem to dominate today with either gangland violence or insipid scoial dramas. AS