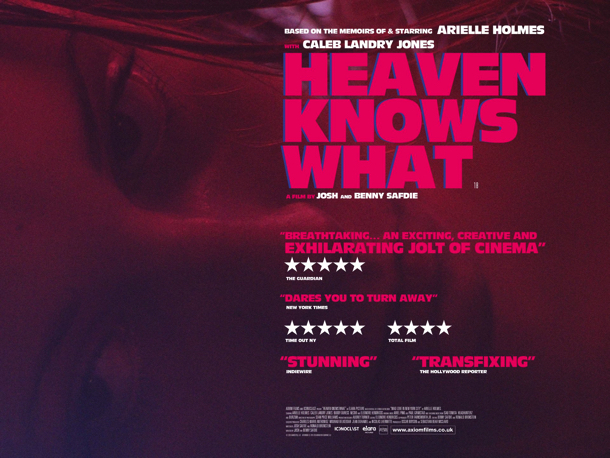 It takes one to know one, and former junkie Arielle Holmes has been there and survived to tell the story. HEAVENS KNOWS WHAT evocatively re–creates the drug-adled world of her past in a ‘fucked-up’ and fuzzy portrait of the dark side of addiction in her native New York.

This tension-fuelled cinéma vérité mood piece submerges us in the squallid subculture of flaky friends and foul-mouthed existence. Even love is sordid and brutally raw as pictured here by brothers Benny and Josh Safdie. But HEAVENS is also poetic and tragically moving seen through Sean Price Williams’ soulful city panoramas and Isao Tomita’s trance-like and explosive original music.

The film opens with Holmes’ character Harley and her sociopathic lover Ilya Caled Landry Jones kissing each other on the tarmac before he shuts down emotionally and viciously rejects her without explanation. Clearly out of control, Ilya’s only comfort lies on the moral high ground where he hunkers down with a soiled blanket. Harley’s subsequent suicide attempt leads to her seeking refuge with an older woman and she while attempts to re-connect with Ilya, she joins her other junkie mates shooting the breeze, shooting up and throwing up..

Despite its slender plot and sketchy characterisation of these lost lowlifes, who mostly need a stiff kick up the backside rather than a stiff drink, this is a film that wallows in the angst-ridden atmosphere it successfully creates. Clever acting  effortlessly conveys this milieu and you don’t want to go there.MT

OUT ON GENERAL RELEASE AT SELECTED ARTHOUSE CINEMAS FROM 29 APRIL