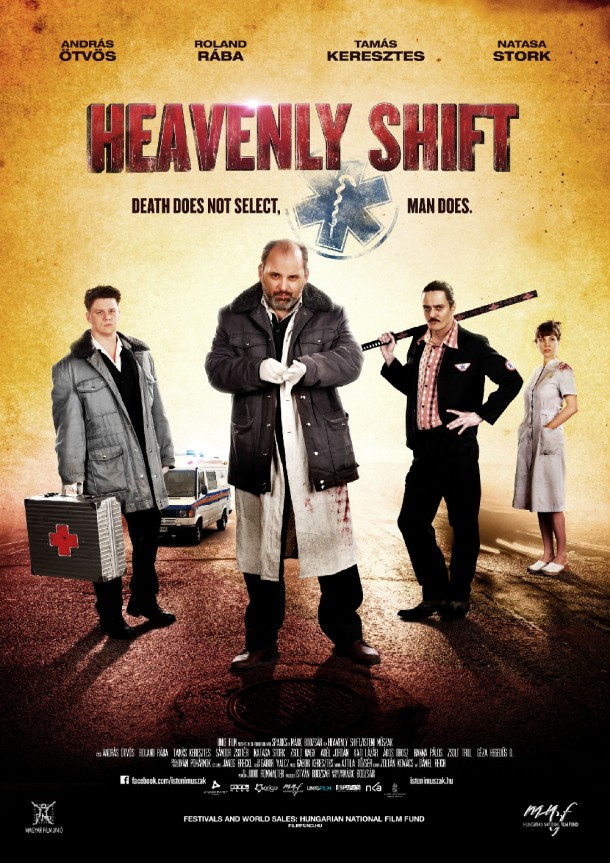 Director Bodzar’s feature film debut HEAVENLY SHIFT is very much in line with recent absurdist Hungarian comedies like György Palfi’s Taxidermia. Somehow between Luis Bunuel and David Lynch, HEAVENLY SHIFT is always entertaining, even though the grotesqueness is so over the top that sensitive souls might have difficulties in keeping their eyes open.

In 1992 young Milan (Ötvös) flees to Hungary from war torn Sarajevo, leaving behind his fiancée Natasa (Stork). In Budapest Milan joins up with a rather odd ambulance crew, led by Dr. Fek (Raba). The driver Kistamas (Keresztes) is very fond of his Samurai sword, which never leaves his side. Milan soon finds out that the crew’s wages are supplemented by a funeral director, who is called, whenever there is a fatality – often caused by Dr. Fek’s diagnosis, that the patient does not want to live any more and is therefore not be resuscitated. Luckily for Milan, said funeral director is also in contact with a Chinese gang, who smuggles people out of Yugoslavia in a coffin.

Milan saves up the 50 000 Forint reward to get his fiancée back, but Natasa has scruples about leaving her patients behind – on top of it, she does not fancy a long journey in a coffin. To compensate for this disappointment, Milan joins Kistamas in his frequent visits to a salon of topless hairdressers, the “Pink Laguna”. After causing the death of drug addict, the crew buries the body illegally, but Kistamas loses his temper and tries to kill one of burial crew, only succeeding in injuring Dr. Fek near fatally. Trying to save his life, Milan and Kistamas speed to the hospital, but  tragedy intervenes leaving only one survivor.

Most of the action is set in the narrow compound of the ambulance, sparing audiences little of  the gruesome and bloody details. Crass materialism and profiteering seem to rule post-communist Hungary, and Bodzsar is not very complimentary about his fellow countrymen. The acting is brilliant, and the camera as original as the narrative, always finding new angles from which to showcase the mayhem. Overall, cast and crew must have had a great time shooting a film which manages to entertain us as we fly by the seat of our pants amid an onslaught of grisly physical and psychological extremes. AS