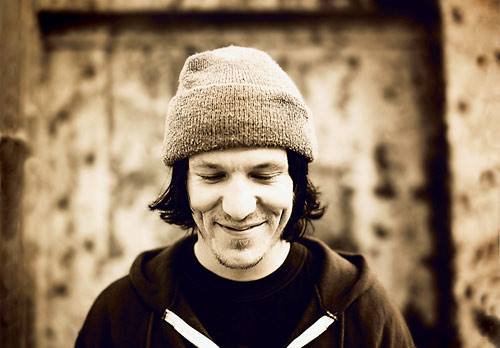 Nickolas Rossi’s debut documentary, which he also co-photographed, is an earnest and very soulful insight into the life of singer and songwriter Elliott Smith (1969-2003), whose melancholic and often nihilistic ballads are played against a background of the places Smith inhabited, mainly Portland, Oregon. The greatest strengths of the film are the long shots of urban life, often at night, giving the documentary a noirish quality, quited suited to Smith’s personality and the unclear circumstances of his untimely death.

Elliott Smith was born in Omaha, Nebraska, his parents divorced when he was six month old and Elliott was raised in Duncanville, Texas. His childhood was very traumatic, he did not get on with his stepfather, and it emerges that music became an outlet for his psychological troubles. In Portland he was to become part of the punk rock scene in the early 1990s, culminating in him playing and singing for “Heatmiser”.  But it soon became clear, that his talents were best served as a solo artist, and he was, at the beginning of his career, often compared to Paul Simon. His first release “Roman Candle” (1994), was followed two years later with his first film score for “Lucky Three: an Elliott Smith Portrait”.  Smith’ next album “Either/Or” gave much insight into the psyche of the songwriter: the title is from a two part volume of the Danish philosopher Soren Kirkegard, an early existentialist, whose main topics were angst, death and the questionable existence of God.

His link with the  film world came in 1997 when he wrote “Miss Misery” for Gus Van Sant’s movie Good Will Hunting, and was nominated for an Oscar. At the Oscar ceremony in March 1998, he played the song, finding the occasion very “absurd”, and not minding that he did not win. Further albums like “XO” and “Figure 8” (2000) established him as a star. Like many artists, Elliott Smith was a shy person who hated touring and interviews and after he moved to New York in 1998, his psychological problems worsened, as did his alcohol and drug dependency. In California, his condition deteriorated even more, though he wrote the song “Needle in the Hay” for Wes Anderson’s The Royal Tannenbaums (2001). On his 34th birthday on August the 6th 2003, he gave up drugs and alcohol after many failed treatments but, ironically, he was to die of two stab wounds in his chest, later that year and the inquest left an open verdict. At the time he was living with his partner Jennifer Chiba in Echo Park, California.

Song titles like “Everything Means Nothing To Me’ and “Ballad of Big Nothing” are not the only sign of Smith’ vulnerability: even though HEAVEN ADORES YOU interviewed many friends and musician (among them Joanna Bolme, for whom Smith wrote the ambivalent love song “Say Yes”), nobody seems to have known Elliott and he remains an enigma for everyone he met. The motifs of nomadic wandering, solitude and melancholia captured in the dark images of Portland, New York and Los Angeles are the nearest we will ever get to a man, whose introspective nature collided with his status: “I’m the wrong kind of person to be really big and famous”. AS