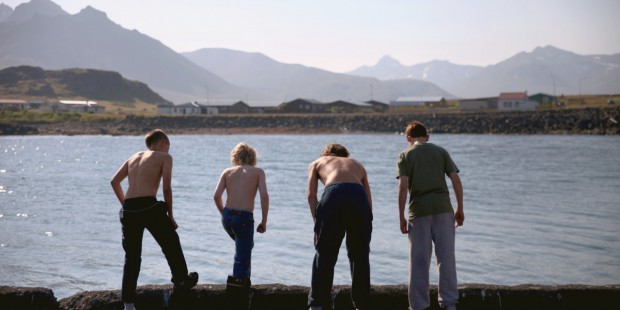 In a remote Icelandic fishing village the hostile terrain provides a chilly counterpoint to the sexual awakening of two young teenagers in this movingly thoughtful if overlong feature debut. The young cast of newcomers is really what makes HEARTSTONE such an affecting drama, rather than its meandering narrative. We feel for them in their unsettling changes, but this would have held more more dramatic weight with a tighter edit. This is a small criticism for an impressive start. Writer-director Gudmundur Arnar Gudmundsson has really marshalled his material and created an impressive film that certainly shows great insight into the kids’ confused state of adolescence.

The story follows best friends Thor (Baldur Einarsson) and Kristjan (Blaer Hinriksson) are who are at a loose end in this remote outpost, and given to bouts of aggression, sadly directed at wildlife, but there is also a tenderness between the boys – and they are only boys – with Thor still really only a child. Despite the country setting, family life isn’t easy and Thor is constantly teased by his older sisters — Rakel (Jonina Thordis Karlsdottir) and the more creative Hafdis (Ran Ragnarsdottir), who has a penchant for Bjork. Their father has cleared off with a younger woman, leaving their mother (Nina Dogg Filippusdottir) unsettled emotionally as she casts around for another man. Kristjan’s father (Sveinn Olafur Gunnarsson) is rather butch and macho – clearly a homophobic and hard drinker. The boys have already tried their luck with girls: Beta (Dilja Valsdotttir), and her friend Hanna (Katla Njalsdottir). But their true colours slowly emerge (and I mean slowly) on a spiky camping trip – not least due to the undergrowth. There’s a memorably dramatic scene where Kristjan’s father takes the boys up a mountain side to search for gulls’ eggs but the pace slackens during the final scenes despite a certain poignance in the ending that makes this an impressive first feature. MT