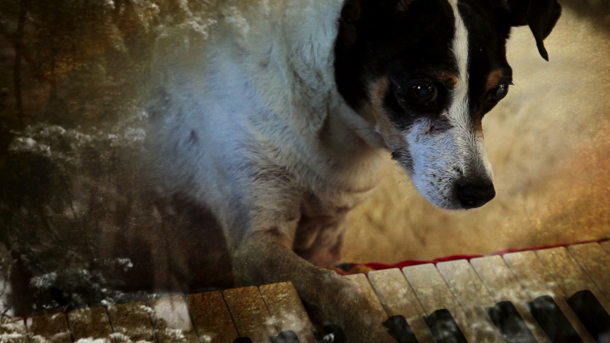 Apart from a brief foray at Cannes 2019 with her short film To the Moon (2019), Heart of A Dog is still Anderson’s most recent feature, playing out on many levels: documentary, animation, essay and installation – the latter part of the artists’ Habeus Corpi installation which showed in 2015 in New York City.

The star of the show is unsurprisingly a dog (to be precise, six canines were in front of the camera), with Anderson’s own, late companion Lolabelle, a terrier, taking centre stage. Early on the filmmaker dreams of giving birth to a dog, even though she cheated a little in the process, and this is shown in Laurie’s charming pencil sketches. Further musings after the death of Lolabelle lead Anderson to the main subject of her film essay saying goodbye not only to Lolabelle, but also her mother (and always unspoken) her husband Lou Reed, who died in 2013, and whose Turning Time Around plays powerfully over the end-credits.

The overall style is liquid with all segments flowing – in an associative way – into each other. Some strains are picked up again, a case in point is the potent reaction to 9/11 with images of the huge NSA HQ in the Utah desert in Utah (where the recordings of security agencies are made and stored indefinitely). In California Lolabelle nearly became the victim of a circling hawk who mistook her for a large rabbit. Later, Anderson dreams about her dog being in ‘borda’ for 49 days, a sort of liminal state before re-incarnation, as taught by the Tibetan ‘Book of Death’.

But the director is always self-critical: after telling the story of her long hospital stay after a childhood accident when she found herself in a ward with children suffering from serious burns, Anderson remembers censoring her memory and leaving out the “cries, dying children make”.

With quotes from Wittgenstein and Kierkegaard, Heart of a Dog is a love letter about letting go – melancholic, but never depressing. It celebrates life and many art forms, the human and the canine spirit, leaving the audience in a contemplative mood. AS