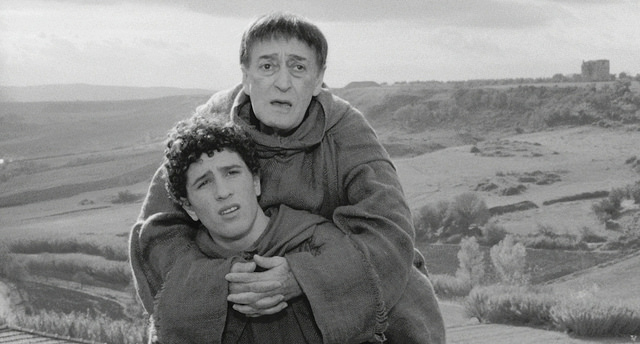 Pasolini’s eighth film has all the charm and innocent humour of Italy in the sixties but while managing to take on and delicately express some serious human and philosophical themes of that era: the power of the Catholic Church; left-wing intellectualism (Pasolini was a confirmed Marxist); pregnancy out of wedlock; poverty and class conflict.

Ninetto Davoli plays a teenager walking through the neo-realist landscape of Lazio – near Rome –  accompanied by his formally-dressed father (the famous comedian Totò), on their way to a metting.  During their walk they bump into a crow, a pregnant woman, and other allegorical figures who each represent one of the themes of the piece.

During their long journey on foot,  the crow tells the story of how St. Francis instructed two of his disciples to spread the Word of God and to love one another, while the son and father become the disciples (Fra Ciccillo and Fra Ninetto): Toto the more faithful one, while his son is the more lascivious of the pair. The crow relates various biblical parables as a group of travelling actors enact the various characters. The neorealist setting is rendered in a delicate and beautifully framed starkness that elevates the humour to something rather tragic and appealingly absurd, as Pasolini gently plays with tonal nuances, in one of his more abstract but idiosyncratically Italian works, also said to be his favourite film. Ennio Morricone’s opening score accompanies Domenico Modugno who sings out the film’s credits. MT

Hawks and Sparrows is now on BLU-ray and dual format DVD rom Masters of Cinema.