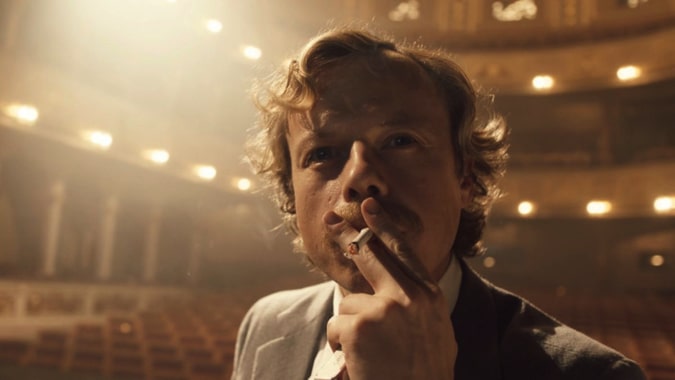 Slavek Horak fails to do his subject justice in this ‘buddy movie’ about Czechoslovakia’s final president and human rights activist Vaclav Havel (1936-2011) framing him as a lecherous womaniser and coward while playing down a prodigious literary talent and author of 245 plays, nine books of non-fiction and six volumes of poetry.

The film focuses on Havel’s adult life leading up to his election as first president of the Czech Republic in 1993, several years after the nation’s “Velvet Revolution” in 1989. There are two time scales: the first one covers his Havel’s life at the theatre in the 1960s the second his imprisonment and dealings in the aftermath to the invasion in 1968. Clearly Horak is not a big fan of the Czech statesman; his treatment plays fast and losse with history, paraphrasing and over-simplifying as it goes along, And this approach is born out in the dialogue. When Havel (played by a game Jan Dvorak) confesses to his wife Olga (Geislorava) “I haven’t been as morally strong as you deserved. But you have always been my First Lady”; Olga replies: “I’d rather be your only lady”. When Havel tries to be philosophical, the result is not much better: “The most interesting thing about the conscience is, that we carry it with us always”.

Havel does not fare any better with his temperamental co-conspirator, the actor Pavel Landovsky (Hofmann), during their illegal battle against the regime after 1968: “You can’t push people to join!…They join us when there are more of us, but there won’t be more of us, if they don’t join us”. Logic prevails. Most complaints come from Olga, who also had to listen to Havel’s ‘confessions’ of his adultery: “for once, would you just NOT tell me”. Further critique follows: “act like a man for once” and “you still think you can have it all?” This plays out during illegality and subversion, after Havel was expelled from the theatre and had to work at a brewery.

But pride of place goes to the exchange between Havel and his mistress Anna Kohoutova (Seidlova), the wife of fellow playwright and conspirator Pavel Kohout (Majer): “My husband is a great fan of yours.” meanwhile “My wife is my biggest critic”. Finally, having declared: “I don’t want to protest, I want to do Theatre”, Havel becomes one of the founder Members of Charter 77, which is smuggled to the West. Again Horak tackles this with platitudes, and not just verbal ones. During interrogation Havel is accused of being a martyr “You are playing the martyr, but when they pressed, you sh.t yourself”. And afterwards, he tells Olga that he only told the authorities what they already knew. “What you don’t know, you can’t tell”. Olga then counters with “Not even to yourself?”

Despite its rather lamentable content this is an elegantly crafted piece of filmmaking. DoP Petr Malasek creates an attractively muted aesthetic all in hued of gunmetal grey and dark blue. Vladimir Hruska’s set design reflects the era but still feels fresh and imaginative. But Horak’s choice of music, scored by Petr Malasek, gives into sensationalism, creating an overwhelming emotional pull that would do any Hollywood blockbuster proud. Surely Vaclav Havel deserves better than this. AS