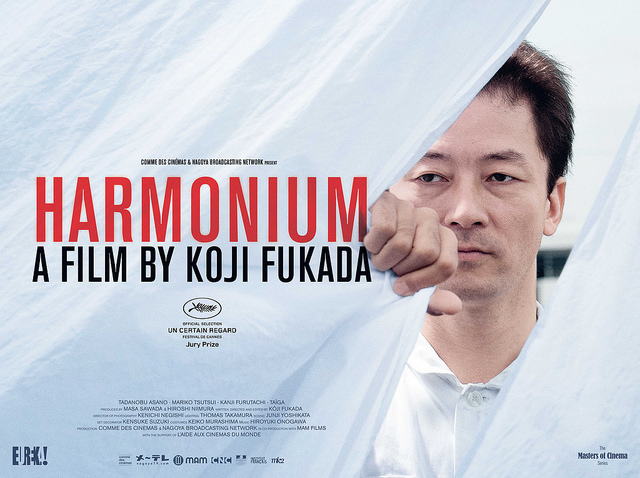 The habitual genteel family set-up is turned upside down in Koji Fukada’s noir thriller Harmonium where a Japanese home becomes an unsettling place fraught with underlying guilt from  which resurfaces when a strange figure from the past disrupts the domestic harmony of one small family.

The Japanese title Fuchi Ni Tatsu alludes to the edgy atmosphere that envelopes the lives of Toshio (Furutacki) a regular church-goer who runs a small engineering workshop from home where he lives with his wife Akie (Tsutsui) and young daughter Hotaru (Shinokawa).

Life is fairly uneventful, Hotaru is learning to play the harmonium, her musical talent eclipsed by her pretentious and argumentative nature. But when Toshio takes pity on a old friend Yasaka (Asano) who has just been released from jail for committing murder, not only employing him, but also giving him a room in his house, the story takes a sinister turn for the worst.

The reason for Toshio’s generosity appears to stem from their collaboration in the murder, but Yasaka initially seems to have turned over a new leaf, making himself an affable guest, even offering to help Hotaru with her music studies. Can a leopard ever change his spots? This is the premise on which the narrative unfolds. And without giving too much away, it seems –  as ever – that this is unlikely.

What makes Harmonium so remarkable is that all the adult protagonists are terrible ordinary, banal even: there is no whiff of any sculduggery, just smalltime folk going through the daily grind – we see Toshio toiling in his workshop and Akie sewing – they only speak to each other at mealtimes; Toshio seems totally detached from the other members of his family, and has more in common with Yasaka, his guilt for having avoided prison appears to be his only emotion.

DoP Ken’ichi Negishi’s camera closes in on the characters, underlining their isolation from each other. This is a tense and cleverly misleading thriller with some impressive performances, particularly from Tsutsui who feels betrayed by the men, and yet helpless in her attempts at making her daughter’s life meaningful. A clinical study of the banality of evil. AS