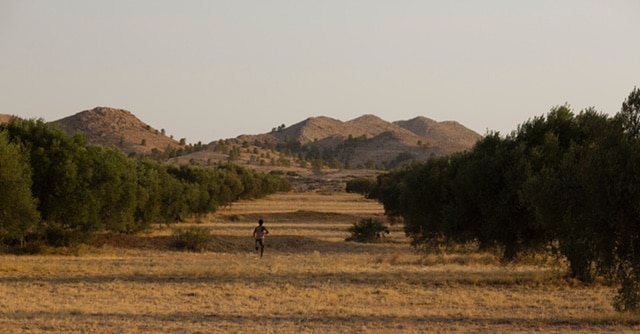 French Tunisian actor Adam Bessa gives one of the most powerful performances of the festival so far as a young man dreaming of a better life but ground down by frustration and poverty in a Tunisia still down on its knees in the aftermath to the Arab Spring.

Ali is making a pittance by selling gasoline, when his dreams of migrating to Europe are shattered by the news of his estranged father’s death from cancer. His two younger sisters are now entirely his responsible as his elder brother has since moved his own family to the tourist resort of Hammamet to run a restaurant. But there’s a sting in the tail when he discovers his father’s unpaid debts will mean losing the family home.

The dust, heat and grime are potently palpable elements here along with police corruption and government bureaucracy, making it hard for the poor and semi illiterate Ali to make a living from anything but hand to mouth grifting with his illegal contraband activities. Ali fails in an attempt to take up his father’s old job at the local government offices. He then tries his hand at another black market endeavour that proves highly lucrative until the police catch up with him. Nathan keeps us engaged in a well-paced arthouse gem that plays out like a thriller with a strong dramatic arc, and although Ali is not a particularly likeable character, we feel for him in his plight.

With his mental health at rock bottom Ali is prone to violent outbursts, darting hostile glances of savage mistrust at anyone close to him but (like the Kray Twins) reserving a tacit respect for his sisters whom he still cherishes, even buying the youngest a puppy in scenes that provide tender relief from the gritty social realism of a film that dwells on the social and political ills of a North African nation divided by wealth and abject poverty, the current affairs overhead in the coffee bars as men gather to shoot the breeze. But despite the overarching tone of anxiety and often brutal violence Tunisia’s arid landscape, vibrant colours and break-taking coastlines captured in Maximilian Pinter’s artful framing and camerawork make this a striking and emotionally moving first feature. MT