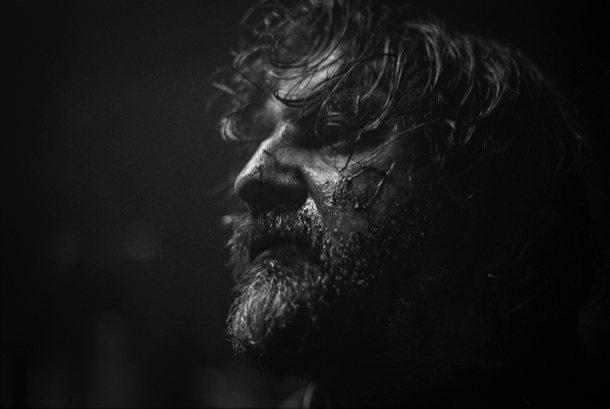 Just before his death in February 2013, Russian director Aleksei German (*1938), finished his last film and legacy HARD TO BE A GOD. Final touches were added by his wife and co-writer Svetlana Karmalita and his son Aleksei German jr. Shooting took place between 2000 and 2006. The film is based on the novel of the same name by Boris and Arkady Strugatsky. They also wrote novel and script to Tarkovsky’s Stalker and Sukorow’s Days of the Eclipse. In 1989, the German director Peter Fleischmann directed a version of the novel “Hard to be God”, under the title Es ist nicht leicht ein Gott zu sein (“It’s not easy to be a God”). The brothers Strugatsky could be called SciFi-writers, placing their novels in the past, but actually writing in coded form about life in the Soviet Union.

Whilst Fleischmann took a philosophical approach to the novel, with long monologues by the central character Don Rumata, German overwhelms his audience with stunning, often absurd monochrome images. Rumata is a scientist sent from earth, to find out why the planet Arkanar is so backwards, the population still living in the middle-ages. In German’s version, Rumata is much less communicative than in Fleischmann’s because in the Russian outing, Rumata is not allowed to help the population on its way forward, so he just comments on the permanent warfare taking place around him in the mud, pretending to be a God, but nobody really believing it. It is not quiet clear what the two rival groups, “Blacks” and “Greys”, are fighting for, but the battle scenes are vicious, the violence shown in gruesome detail making it extremely unpleasant viewing. Drowning in the muddy autumnal weather as winter gradually brings its dank, filthy, rainstorms that gust over the fields and the ramshackle houses that offer scant shelter from the elements. By the end of the film a frozen winter has set in, snow covering the battlefields and frigid corpses strewn all over the place.

Arkanar is a hellish place: the paintings of Hieronymus Bosch and Brueghel spring to mind. There is no relief from the endless slaughter, drinking, shouting and torturing. The absence of anything or anybody even mildly encouraging is terrible. Quite evidently this film is a portrait of the old Soviet Union, and it comes as little surprise that German only finished five films in the USSR between 1968 and 1998; Soviet censorship taking not too kindly to his frontal attacks on the system, in comparison with the more subtle works of Tarkovsky and Sukorow. Aleksei German was the USSR’s harshest critic. In some ways there is a certain nostalgia about HARD TO BE A GOD; the inhuman world of Stalinism has gone, making the drama now feel like a time capsule; a witness report sent too late.

The DOPs Vladimir Ilyin and Yuri Klimenko have really created a world of hyenas and vultures, a slum of souls played out in a battlefield of elementary degradation. HARD TO BE A GOD is an epic vision of hell, told in the most minute of details. It is indeed a sight for sore eyes; the human condition is a rotten one. Those who stick with it will be greatly rewarded. AS