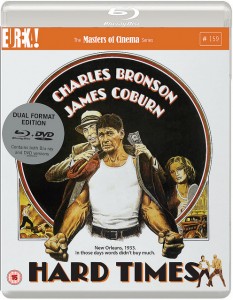 Witty, watchable and tight as the bruising fights it portrays, the film showcases Charles Bronson at his best as a strong and laconic hero alongside James Coburn’s sassy fixer and Gill Ireland’s vulnerable siren.

Unlike the majority of hagiographic US sporting portraits HARD TIMES is a strait-talking amusing affair that gets out and about in its Southern locations and in the high octane boxing ring. Solid performances underpin an entertaining snapshot of a tough but colourful episode in US history. MT