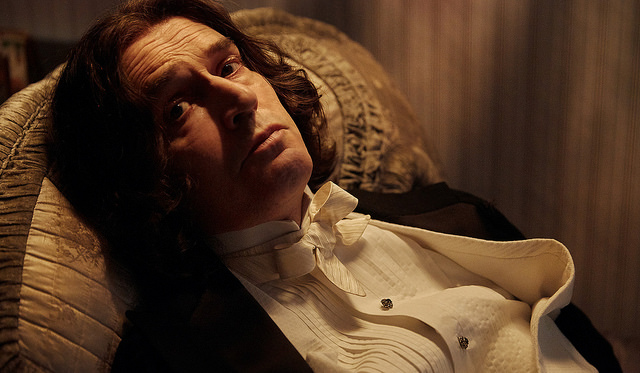 Rupert Everett has made no secret of his appreciation for the British playwright Oscar Wilde having played him in various film and stage adaptations with The Happy Prince being the latest. His debut as director and writer draws comparisons with the theatre outing The Judas Kiss where the focus is Wilde’s controversial relationship with Lord Alfred Douglas – better known as Bosie – a crime that led to several years in a hard larbour camp for which the writer received a posthumous pardon last year.

Taking its title from Wilde’s fairy tale parable about the friendship between a statue and a swallow finding the Kingdom of Heaven after sacrificing their worldly treasures – Wilde is pictured in the opening scene reading this bedtime story to his children in flashback, and at the end, to his protégées, a pair of French urchins (Benjamin Voisin and Matteo Salamone).

In between Everett avoids a straightforward narrative opting for an impressionistic hagiographic hotpotch of visually alluring vignettes that follow Everett’s Wilde as the self-indulgent raconteur of his own decadent final years as a raddled Victorian roué in exile roaming the flesh pots of France and Italy on a flight of fancy, courtesy of a generous allowance from his estranged and undeservedly berated wife Constance (Emily Watson). During this interlude, Wilde emerges as a bloated narcissistic lush mourning his unfinished love affair with the rather fey Bosie (Colin Morgan), while dallying with the more reasonable Robbie Ross, his literary agent. He eventually reunites with Bosie in scenes that suggest their affair is fired as much by lust as by mutual understanding. Everett makes the decision to flip from French to English accentuating the rather pretentious tone of the piece and detracting from the moments of coruscating wit that pepper Wilde’s caustic repartee.

Although the result is an ethereal feast for the eyes this is a film far too floaty and dramatically unsubstantial to sustain the attention for its 103 minutes, despite some sterling underpinnings from Everett himself, Colin Firth as Wilde’s old habitué Reggie Turner and a thoughtful but underwritten Emily Watson. MT